Marvel at Niagara Falls and tour Old Montreal, Quebec City and more on this Regional Explorer trip. Explore Canada’s cosmopolitan cities, French and British heritage and majestic natural landscapes, from the cascading waters of Niagara Falls to the pretty meadows, rolling hills and farms of Eastern Townships in Quebéc. 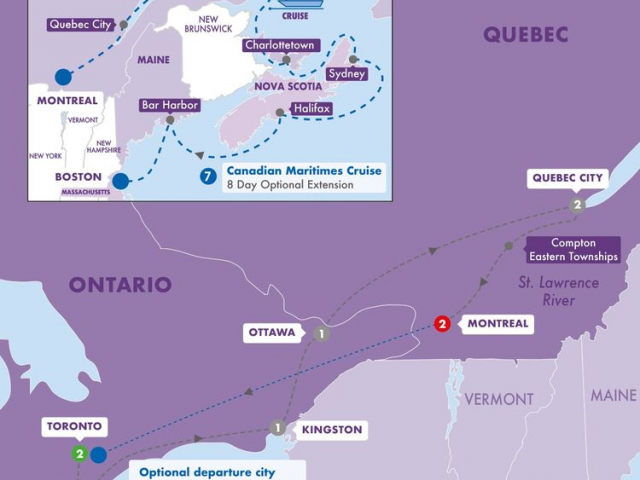 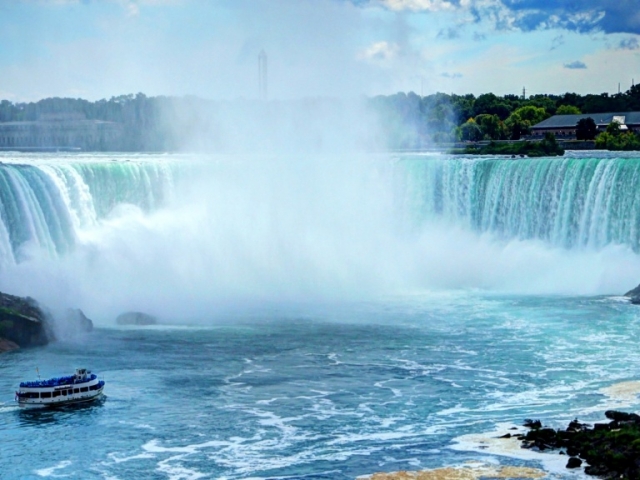 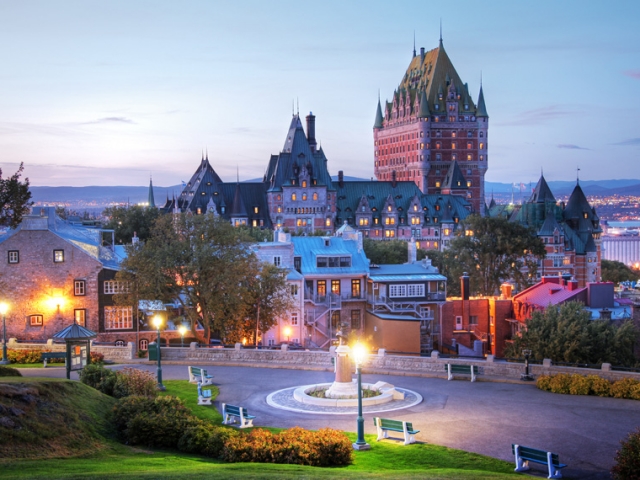 Canada’s multi-cultural metropolis of Toronto launches your journey across Eastern Canada. Relax after your journey, then meet your Travel Director and fellow travellers for a Welcome Reception this evening.

Witness Mother Nature’s power first-hand when you journey to Niagara Falls and embark on an exhilarating boat ride to the base of Horseshoe Falls. You’ll have some time on your own to explore Ontario’s most enchanting village, Niagara-on-the-Lake. Spend the afternoon strolling down its tree-lined streets and admiring the 19th-century façades or enjoy the tranquillity of its botanical gardens.

Our day begins with an orientation tour past Toronto’s sprawling Queens Park, stately University Avenue and the Provincial Parliament Buildings. We ascend Toronto’s iconic CN Tower before continuing to Kingston, a 17th-century former French trading post and gateway to a Thousand Islands. This evening, we set sail on our dinner cruise against the backdrop of pretty riverside cottages and uninhabited islands.

Arriving in Ottawa, we embark on an introductory tour of Canada’s capital. You’ll have a full afternoon to explore the city on your terms. Consider a visit to one of the city’s museums or join an Optional Excursion cruise on the Rideau Canal.

The sticky, rich flavours of Canada’s traditional maple syrup will linger long after your morning stop at the local cabane a sucre (sugar shack). Then continue to Quebec City to begin your love affair with the city’s French Canadian joie de vivre and your hotel in Old Quebec.

Embark on a captivating walk through the narrow streets of Old Quebec City, joining your Local Specialist for an in-depth discovery of this UNESCO-listed place exuding all the charm on a European city. Spend the rest of the afternoon exploring La Vieille Capitale on your terms.

Leave the city behind, bound for Quebec’s picturesque Eastern Townships. Your journey will take you past pretty villages and rolling farmlands before arriving at Domaine Ives Hill for an exclusive ‘Be My Guest’ lunch. ‘Connect With Locals’ and learn how black currants are farmed, picked and processed into a variety of beverages. You’ll have an opportunity to make your own black current tea and enjoy a tasting session, followed by a hearty lunch of locally sourced ingredients. Later, we’ll make our way to Montreal and admire panoramic city views from its namesake, Mount Royal.

Explore the Island of Montreal with ease, joining your Local Specialist for a sightseeing tour that will reveal the splendour of such historic sites as the ornate Notre Dame Basilica, the colourful Old Port area and Downtown Montreal. Gain a deeper appreciation for the city’s French Canadian roots as you spend the afternoon exploring the city on your terms before joining your fellow travellers for a Farewell Dinner in Old Montreal.

Bid a fond au revoir to newfound friends as you are transferred to Montreal International Airport.