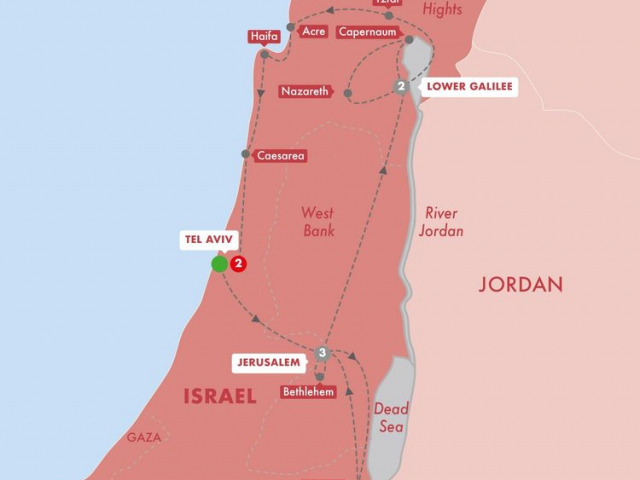 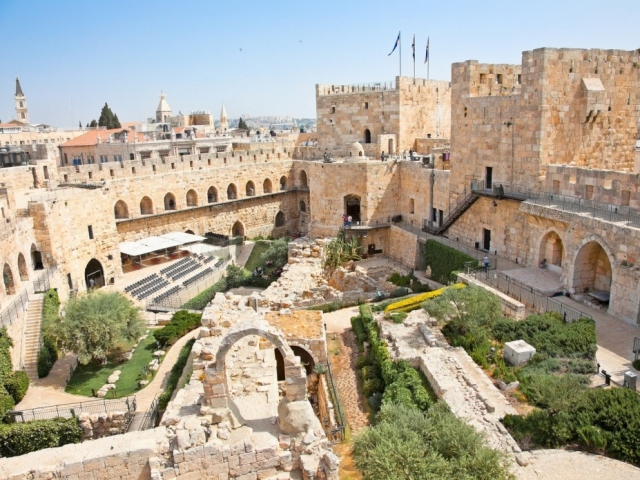 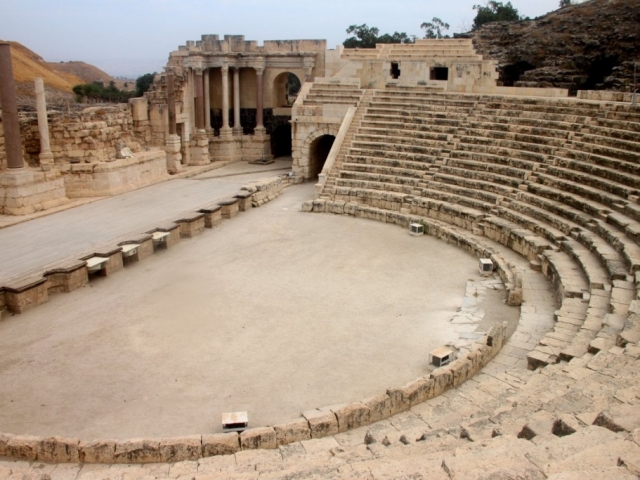 Your journey through a land regarded by many as the holiest of the holy begins in the sacred city of Jerusalem, which you will have an opportunity to explore before joining your Travel Director and fellow travellers for a Welcome Drink to herald an epic journey into antiquity. L’chaim!

Journey across the rocky Judean Desert to the site where the Dead Sea Scrolls were found accidentally by a Bedouin boy in 1947. Visit the striking clifftop fortress of Masada, where a Roman siege ended in the tragic mass suicide of over 900 Zealots. Their sacrifice remains as a symbol of Israel’s pledge to remain free. Stroll through the excavations of Herod’s palatial retreat, before returning to the lowest point on earth to float in the salty waters of the Dead Sea (time permitting). This evening, we share a traditional meal at our hotel.

Tread in the footsteps of prophets, crusaders and kings, admiring the Old City of Jerusalem from the sacred vantage point of the Mount of Olives. Stroll through the Jewish Quarter where you’ll ‘Dive Into Culture’ at the Wailing Wall and watch faithful Jews cede their prayers to the crevices of its ancient rocks. See the Dome of the Rock on Temple Mount and follow the path taken by Christ past the Stations of the Cross along the Via Dolorosa to Golgotha, arriving at the 4th-century Church of the Holy Sepulchre, where Christians gather to commemorate at the traditional site of His Resurrection. Later this afternoon, travel to Bethlehem where the story of Mary, Joseph and Jesus officially begins. Visit the Church of Nativity, built on the site traditionally considered to be the birthplace of Jesus, and the Manger Square before returning to Jerusalem.

This morning, continue your compelling discovery of Jerusalem and visit Yad Vashem to commemorate the millions of lives lost in the Holocaust during World War II. See the Dead Sea Scrolls at Israel Museum’s Shrine of the Book, the Knesset, and the Givat Ram Campus of the Hebrew University, before travelling through the farmlands of the Jordan Valley. In Nazareth, you’ll have an opportunity to visit the sacred Catholic Shrine of the Church of Annunciation, whose cupola overlooks the cave in which Archangel Gabriel appeared to Mary to share the blessing that she would conceive and give birth to the Son of God. Celebrate a strong sense of community at your overnight stop at a Kibbutz hotel, where you’ll dine this evening.

Begin the day with a boat ride on the Sea of Galilee and visit the Jesus Boat, an ancient fishing vessel dating to the 1st century AD. Continue to the ruins of the old synagogue at Capernaum, said to have been built on the home of St. Peter. Then visit the Mount of Beatitudes, where Jesus delivered the Sermon on the Mount. Next, venture to one of Judaism’s Four Holy Cities and the birthplace of the Kabbalah movement, Safed. Proceed to your Kibbutz hotel in Lower Galilee where you’ll enjoy dinner.

Continue to the almost-intact 12th-century underground City of Acre to admire its medieval Crusader buildings, before enjoying views of the Baha’i Shrine and the beautiful Persian Hanging Gardens of Haifa, created as a memorial to the founders of the Baha’i faith. Imagine seafaring traders plying their wares in the ancient port city of Caesarea, then travel to the vibrant city of Tel Aviv, our home for the next two nights.

Visit Rabin Square this morning. Here you’ll learn about the assassination of Prime Minister Yitzhak Rabin, who has become a symbol of the Israeli-Palestinian peace process. Continue to Newe Zedek, the first neighbourhood of Tel Aviv and soak up the cosmopolitan atmosphere of Rothchild Boulevard. Next, stroll through the ancient ruins of Old Jaffa and explore the biblical stories and ancient mythology of the Old Port. The robust aroma of coffee makes an appearance next at an exclusive ‘Be My Guest’ lunch in Ajami neighbourhood where you’ll ‘Connect With Locals’ and learn about the personal story of a Christian girl growing up in a Jewish, Muslim and Christian area..

Our epic journey through the sacred lands of Israel has come to an end. All that’s left to say is a fond farewell to fellow pilgrims as you prepare for your journey home.