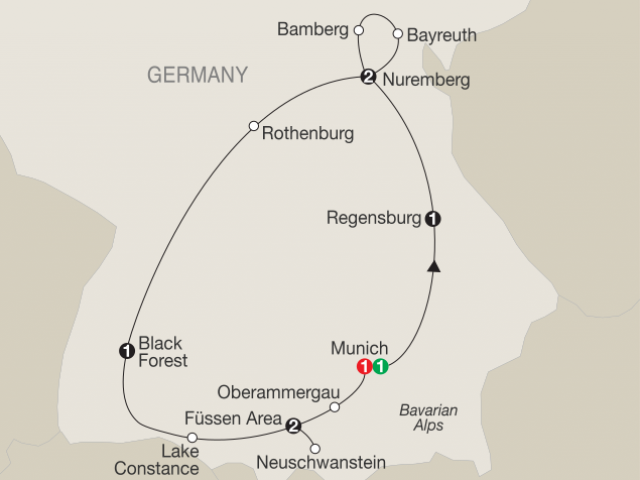 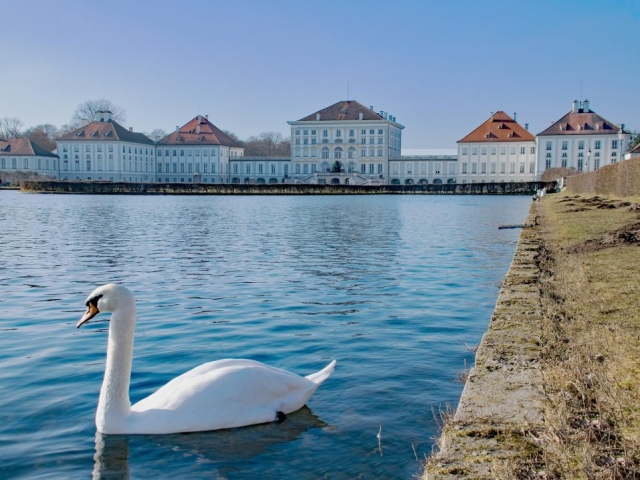 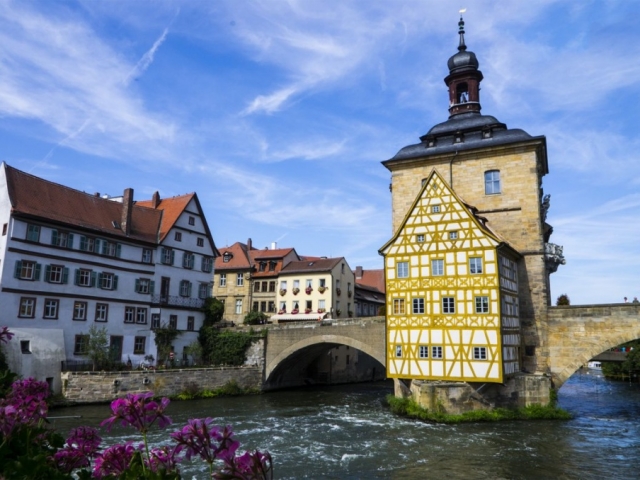 Time to relax or to start exploring the lively Bavarian capital. At 6 pm, meet your Tour Director and travelling companions for a welcome dinner at your hotel.

Germany’s “Secret Capital” comes alive during your guided sightseeing featuring the Olympic Stadium, built for the 1972 Olympics; the 1,000-foot-high Olympic Tower; Nymphenburg Palace; and the Konigsplatz, used for Nazi rallies during World War II. Drive along the Ludwigstrasse, and see the Bavarian Arch of Triumph and Field Marshall Hall, a monumental loggia on the Odeonsplatz. Visit lively Marienplatz with the Old and the New Town Halls and the gothic Frauenkirche. Arrive in Regensburg, and meet your Local Guide for a walking tour, featuring the Stone Bridge, the oldest preserved bridge of its kind in Germany; the Porta Pretoria, built in the 2nd century by Emperor Marcus Aurelius; and St. Peter’s Cathedral. Next, board the Swarovski crystal boat for a relaxing CRUISE on the Danube River. You won’t want to leave Regensburg without tasting a “medieval hot dog” at the Historic Sausage Kitchen.

Visit the Thurn Und Taxis Palace, a former Benedictine monastery that was converted into the residence of the Princes of Thurn und Taxis in 1812. This family started the first large-scale postal service in Europe in the 15th century. Continue to Nuremberg, known for its children’s toys and gingerbread. Admire the medieval ramparts as you walk through the pedestrian area of the charming Old Town. See St. Sebald Church, painstakingly reconstructed as a monument to peace from the rubble of near-total wartime destruction. Also admire the Schoner Brunnen, a 14th-century fountain dedicated to the Holy Roman Empire. It is said that it brings good luck to spin the two brass rings.

This morning, stop in Bayreuth for an orientation of this city of festival fame. When Richard Wagner came to Bayreuth in 1871, he was not satisfied with the existing 18th-century Markgrafliches Opernhaus theatre, so he had a new one built. Today, the Festival Hall is used exclusively for the Bayreuth Festival, and only works by Wagner are performed there. Continue to picturesque Bamberg, the city with the largest historical centre in Germany and a UNESCO World Heritage Site. Taste “smoked beer,” with a distinctive smokey flavour imparted by using malted barley dried over an open flame. Later enjoy a guided walk along the cobblestone streets, and admire the architecture of the houses. Return to Nuremberg.

A short drive delivers you to medieval Rothenburg with its ramparts and towers, cobblestone lanes, and 16th-century houses. Hear how the town survived the Thirty Years’ War, and shop for Christmas ornaments. Enter the Black Forest, associated with the Brother Grimm’s fairy tales and taste the delicious Kaffee und Schwarzwaldkuchen (coffee and Black Forest cake) which the area is famous for.

Today, prepare for a journey into the past with a drive to nearby Schwangau. See two castles facing each other: Hohenschwangau, where King Ludwig spent much of his youth, and the one he built: magnificent Neuschwanstein, the most famous in Germany and inspiration for Walt Disney’s Sleeping Beauty castle at his theme park. Follow your Local Guide through this fairytale castle on its craggy outcrop high above a sparkling lake. Also visit the Museum Of The Bavarian Kings and travel in style on a Horse-Drawn Carriage Ride.

A short drive leads to Oberammergau, the quaint village known for the once-a-decade Passion Play. Time to browse for souvenirs, and you may wish to join an optional excursion to nearby King Ludwig’s Linderhof Castle. The smallest of the castles he built, it is the only one finished and where he stayed the most. Back in Munich this afternoon, you can return to Marienplatz and explore its many enticing shops. Tonight, a farewell dinner awaits at one of Munich’s lively restaurants to say auf Wiedersehen!