Experience the Natural Wonders of Iceland, a world of natural phenomena: gushing waterfalls, volcanoes and stunning landscapes at every turn. The overwhelming beauty of this country will ensure you will want to return again and again. 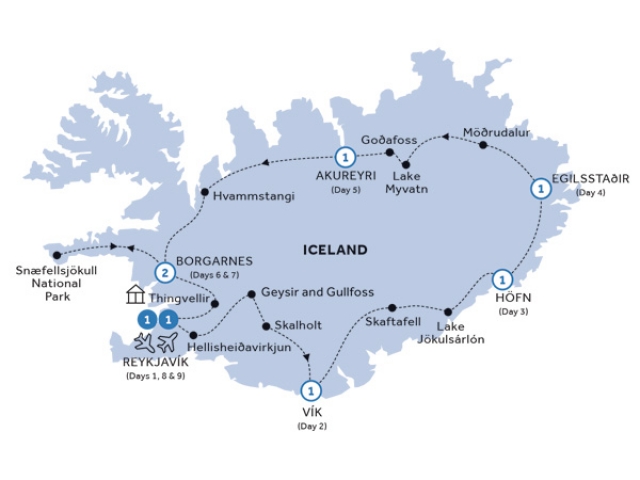 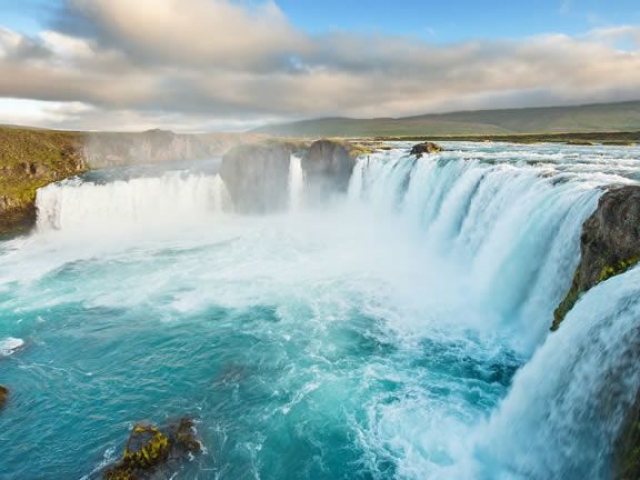 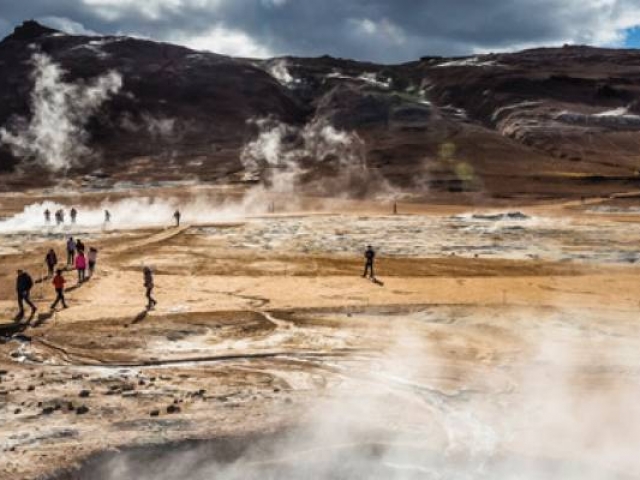 Day 1: The Smoky Bay of Reykjavík

Welcome to Iceland. On arrival at Reykjavik’s Keflavik Airport, you will be transferred to your hotel on your complimentary Insight shuttle operated by Gray Line. Join your Travel Director and travel companions at 18:15 for a Welcome Drink served with canapés.

Head east to visit Iceland’s newest geothermal and electric power station at Hellisheiðavirkjun. Then travel on to the ancient bishopric of Skalholt and see the historic church set in a remote location amid magnificent natural scenery. Continue to the hot springs at Geysir and the mighty Gullfoss waterfalls, the Icelandic equivalent of Niagara Falls. In the afternoon visit the majestic south coast waterfalls of Seljalandsfoss and Skógafoss before continuing to your hotel in Vik.

Day 3: By Glaciers and Icebergs to Höfn

Travel along the southern coast of Iceland, beside the black sand beaches and basalt rock formations. The highlight of the day is the National Park at Skaftafell where you will see the largest glacier in Europe, Vatnajökull. Travel on to the luminous blue icebergs of Lake Jökulsárlón, the dramatic setting of scenes in two James Bond films. Arrive in the small harbour town of Höfn, an active lobster fishing hub. Your Travel Director takes you on a short orientation. Dine at your hotel’s restaurant tonight and experience what the local produce has to offer.

Explore yet another face of Iceland as you drive through narrow fjords surrounded by steep cliffs past small fishing villages. Catch a glimpse of Friar island, once the home of Gaelic monks settling down before the arrival of the Vikings. Upon arriving to Egilsstaðir you may wish to visit Iceland’s first and only geothermal floating pools.

Day 5: By Desert, Lakes and Divine Waterfalls to Akureyri

Journey through the sand desert of Möðrudalur to see Dettifoss, the most powerful waterfall in Europe. Continue on to the beautiful Lake Mývatn. This area offers a wide spectrum of geological formations and the concentrated geothermal activity produces mud pools and spectacular coloured deposits. Continue to Akureyri, enjoy an orientation of Akureyri, the capital of northern Iceland, first established as a trading centre in 1602. Evening to relax or explore at your leisure.

Day 6: From the Capital of the North to Borgarnes

Travel past mountains, waterfalls and green coastal regions to Hvammstangi. Later, continue on to the south-west coast of Borgarnes. Perhaps embark on an optional whale watching experience? (available during whale season).

Travel along the Snæfellsnes Peninsula to Snæfellsjökull National Park known as the Jewel of West Iceland and home to the country’s most famous volcano. See the magnificent Snæfellsjökull glacier surrounded by unspoiled natural beauty. On route, admire the impressive landscapes of Búðir offering a mixture of sandy hills, black lava fields and a yellow beach. Next, take a stroll along the sea cliffs of Arnastapi with it’s unique columnar rock formations while taking in the beautiful scenery.

Day 8: Thingvellir, Blue Lagoon and on to Reykjavík

Journey south to Thingvellir, where the first meeting of the Icelandic parliament was held in A.D. 930. This remarkable UNESCO World Heritage Site lies on the Mid-Atlantic Ridge line where the North American and Eurasian tectonic plates meet. On arrival in Reykjavík, enjoy an orientation of the city with a Local Expert. See the Old Harbour, National Museum, the Hallgrim church and Höfði House. Pass Althingishusid, Reykjavik’s House of Parliament, and continue to the Hallgrímskirkja Church which can be seen from almost anywhere in the city. Visit Iceland’s world-famous Blue Lagoon, where you join your newfound friends and toast to your Icelandic holiday with a drink. Enjoy relaxing in the mineral-rich geothermal waters, surrounded by lava fields and snowcapped mountains. The Lagoon is a wonder of nature and offers a unique experience for both body and soul. This evening, delight in a delicious Celebration Dinner at a local restaurant where you round off your journey through one of the world’s most naturally beautiful places.

Your Icelandic adventure comes to an end, with a transfer to Reykjavík’s Keflavík Airport.

Iceland is a country known for its natural wonders. Beautiful glaciers, active volcanoes, black-sand beaches, geothermal areas, roaring rivers, majestic waterfalls, and beautiful lakes. On this tour, you will start and end in Reykjavík, and you’ll witness these natural wonders while enjoying fun and unique experiences. 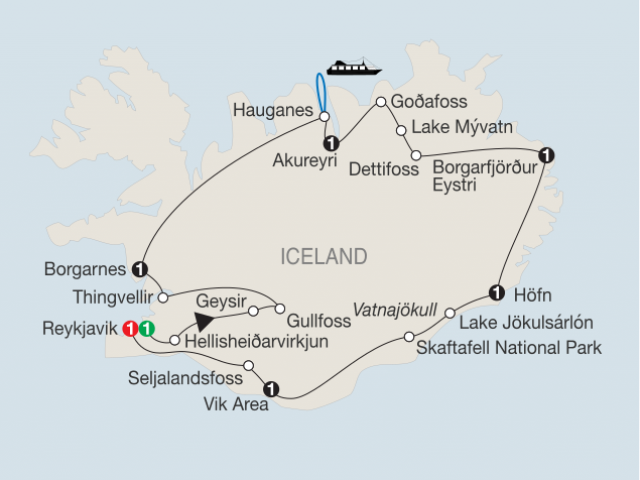 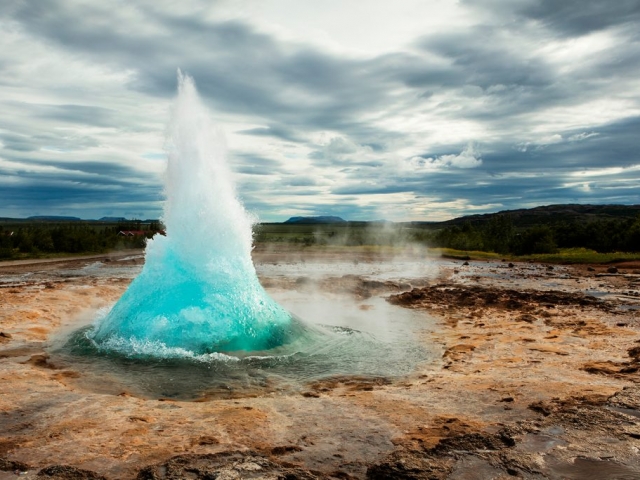 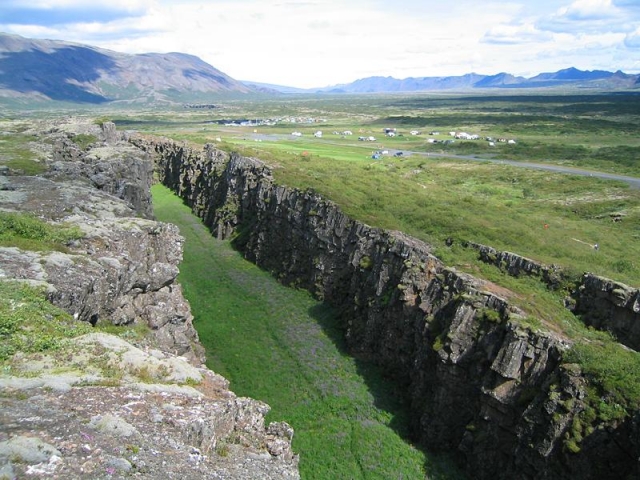 Welcome to Reykjavik! At 6 pm, meet your Tour Director and travelling companions for a welcome dinner at your hotel.

After an orientation drive of cosmopolitan Reykjavik, enjoy an interesting visit to the geothermal heat and electric Power Station in HellisheiOarvirkjun. Next, see the hot springs at the Geysir geothermal area and look forward to meeting the chef of the Geysir restaurant. Taste freshly baked bread, which is cooked using the heat from the hot springs, and served with Icelandic butter, boiled eggs and herring, and a glass of Geysir schnapps, served at freezing point. Then, marvel at the mighty Gullfoss waterfall and stop in Thingvellir, a geological paradise. Here, you will walk through the rift valley that marks the separation between the North American and European tectonic plates.

A real treat! At Hauganes, embark for an unforgettable experience: watch whales in their natural habitat! Continue to Akureyri for your overnight stay.

During your orientation of the capital of northern Iceland, hear about the city’s history after it was established as a trading centre in 1602. Visit the Botanical Garden, featuring specimens of almost all native Icelandic plants. Then, admire GoOafoss, known as the “Waterfall of the Gods.” Enjoy a scenic drive to the lovely blue Lake Myvatn, teeming with bird life in one of Iceland’s prettiest areas, and stop at the Myvatn Nature Baths, a set of geothermally heated pools and steam baths. Before arriving in BorgarfjorOur Eystri, take pictures of the most powerful waterfall in Europe, Dettifoss (road conditions permitting). You may even see puffins, known as the “clowns of the sea” (end of April to mid-August).

In the morning, enjoy a “Meet the Locals” walking tour and hear about life in the rural Icelandic countryside over the centuries. Follow the eastern coast, where the first Irish missionaries settled some 200 years ago, and arrive in Hofn.

Highlight of the day is a stop at Lake Jokulsarlon, where some of the most spectacular scenes of the James Bond movie Die Another Day were filmed. Watch how the largest glacier in Europe, Vatnajokull, flows into the lake, forming icebergs. An exciting optional boat trip is available through the icebergs (mid-May to September, weather permitting). Drive through the national park at Skaftafell and arrive at your overnight hotel.

Along the South shore enjoy views of the Eyjafjallajokull volcano, well known for the eruption that generated the massive ash cloud in 2010, then stop at spectacular Seljalandsfoss waterfall before returning to Reykjavik. This afternoon, join an optional excursion to the Blue Lagoon. Tonight, a farewell dinner awaits at one of Reykjavik’s fine restaurants to celebrate your Icelandic Adventure.

Your budget travel adventure to Iceland is an amazing 8-day journey that begins and ends in the capital city of Reykjavik. You’ll discover that Iceland is one of the most fascinating countries in Europe as you experience its unique, almost lunar landscapes, as well as the simple but interesting culture of its people. 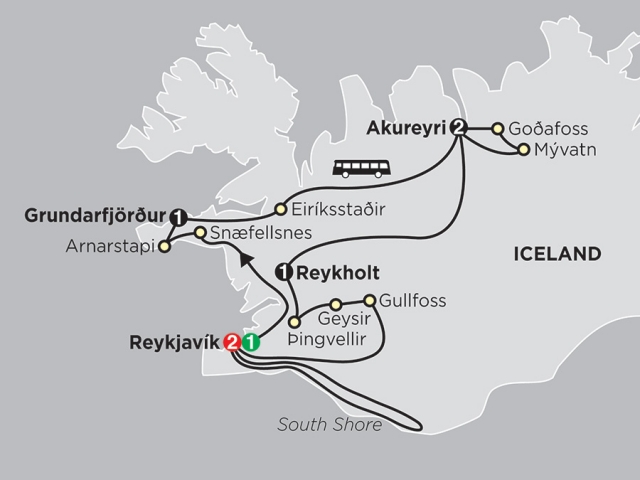 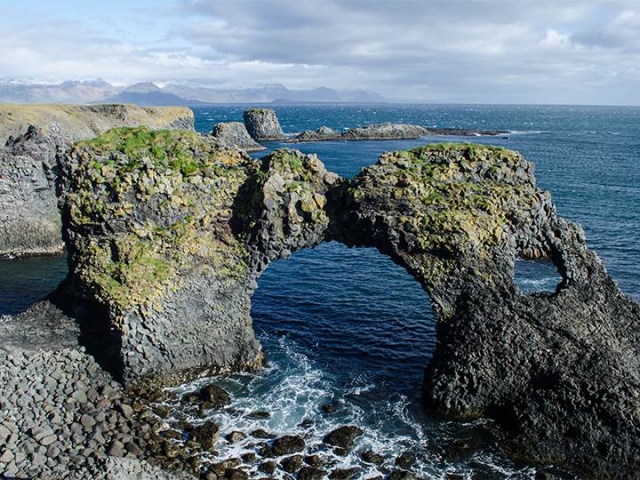 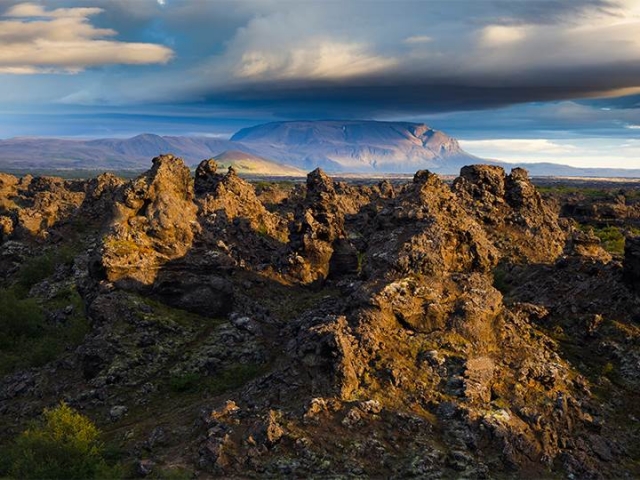 Welcome to iceland! if you arrive early, leave your luggage at the hotel and go out exploring Reykjavik, as check in may not be possible until the afternoon. Use your CosmosGo app for inspiration on what to see and to find your bearings. You will meet your Tour Director in the evening.

Rich fertile farmland and rugged cliffs greet you on your morning drive along the beautiful coastal road to the Snaefellsnes Peninsula. See the Snaefellsjokull Volcano, which can be spotted from Reykjavik on clear days, as well as the glacier that covers its summit. More than 4,700 feet (1446 metres) in elevation, the mountain gained notoriety as setting for Jules Verne’s Journey to the Centre of the Earth. Arrive in the small fishing village of Arnarstapi and walk around the harbour area to enjoy the fresh sea air and watch the antics of circling birds. Later, arrive at the dramatic black-pebble Djupalonssandur beach, where four lifting stones ranging from 50 to 340 pounds were once used to qualify men for work on fishing boats. Spend the night in the quaint Snaefellsnes area.

Iceland’s natural beauty unfolds as you drive through green pastures and meandering lava flows that have formed over the centuries. Via the colourful harbour town of Stykkisholmur, U.S. Marine landing site in the novel Red Storm Rising, reach the Haukadalur valley, home to some of the country’s most famous geothermal features. At Eiriksstaoir, immerse yourself in the sights, sounds, and scents of Erik The Red’s Farm which is also the birthplace of Leif the Lucky, said to have discovered America. This afternoon, head into Skagafjorour, the renowned “Valley of Horses” and one of iceland’s most prosperous agricultural regions. Overnight in Akureyri, the “Capital of North iceland”.

First stop this morning is at Godafoss, the “Waterfall of the Gods.” Then, follow the shores of Myvatn Lake for vistas of the splendid volcano, peaceful wetlands, and abundant wildlife. Later, stop at Skutustaoir to see the intriguing volcanic pseudo-craters; Dimmuborgir, the “Catacombs of Hell,” with its bubbling mud pools, volcanic caves lava tubes and unusual rock formations; and the Krafla caldera with its ochre-coloured glow of subterranean lava. Relax in the mineral-rich waters at the Myvatn Nature Baths before returning to Akureyri for another overnight.

Today features an introduction to the spectacular geothermal hot springs at Deildartunguhver. Here, you’ll find clusters of emerald-green deer ferns growing, a plant that grows nowhere else in the country. Next up is the tiny hamlet of Reykholt, former home of medieval icelandic poet, historian, and politician Snorri Sturluson. Then, see the fascinating series of waterfalls at Hraunfossar before enjoying a stroll along the riverbanks to the Barnafoss waterfall, where the glacial cascade has carved out rock formations.

Some of iceland’s most spectacular sights are on the agenda today as you visit Thingvellir National Park, a rift valley and boundary between the North American and Eurasian continental plates. See geysers as they erupt from the earth’s geothermal vents, and, later, see the famed Gullfoss waterfall before heading back to Reykjavik.

Explore the South Shore today, and have your cameras ready for the awe-inspiring Seljalandsfoss and Skogafoss waterfalls. Then, visit the tiny settlement of Skogar to admire turf farmhouses, a pioneer-era hydroelectric plant, and examples of many periods of icelandic architectural history at the Skogar Folk Museum. On to Vik, the southernmost village in iceland, to see its black-basalt beach, counted as one of the 10 most beautiful beaches on Earth in islands Magazine. The cliffs here are home to a large seabird population, including puffins. Finally, marvel at the Solheimajokull glacier before enjoying a stop in the village of Eyrarbakki.