The enchanting Italian region of Puglia is famous for its historic cities, quaint fishing villages and (of course) its exquisite cuisine. On this round trip, we’ll delve into the area’s many splendours – from Naples to Martina Franca, Lecce, Gallipoli, Bari and back again – touring historic towns, discovering local traditions and indulging in a wine tasting or two along the way. 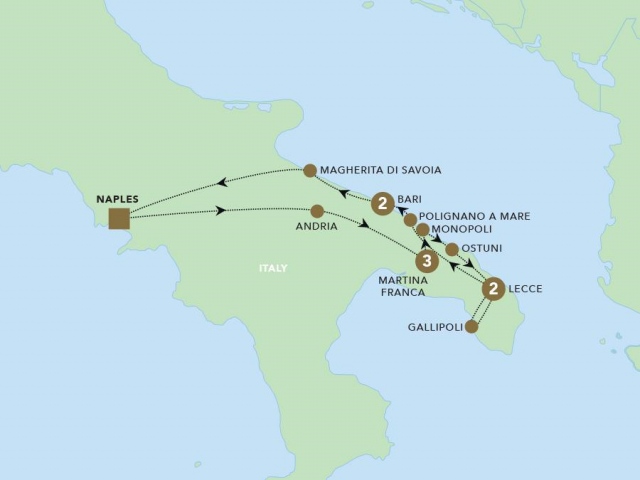 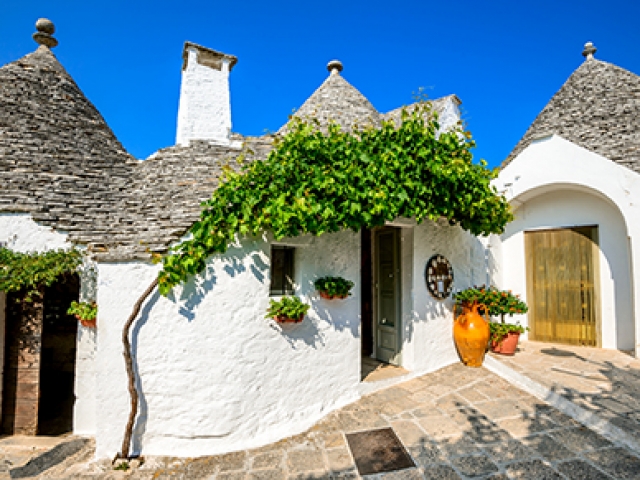 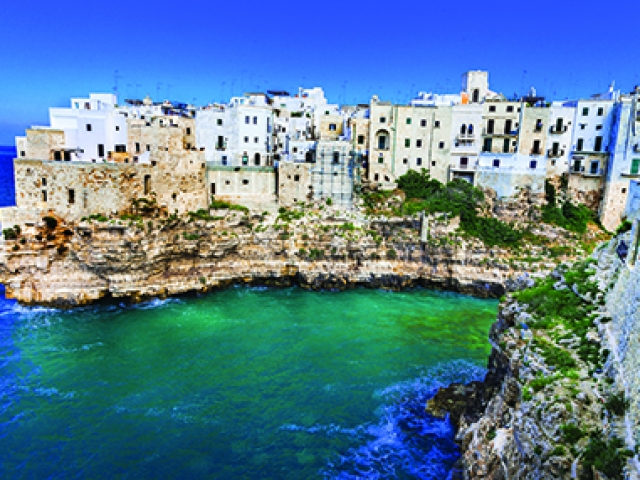 After meeting the group in vibrant Naples, we’ll board the mini-coach and hit the road to Andria – where a local expert will reveal how mozzarella and burrata are made. We’ll have the chance to taste both delicious cheeses before we move on to Martina Franca for tonight’s welcome dinner.

Our first stop of the day will be Alberobello – a UNESCO World Heritage site that’s famous for its charming cone-topped trulli. After learning more about the limestone buildings on a walking tour, we’ll move on to the beautiful countryside of Locorotondo – where there’s a wine tasting session in store for us at a local vineyard. After raising a glass or two, we’ll return to Martina Franca for the evening.

This morning we’ll explore the medieval streets of the quaint town of Altamura with a local guide – with an included bread tasting session at a quaint local bakery to round off our visit. Then: it’s back on the road as we travel onwards to the mesmerising city of Matera. We’ll delve into Matera’s fascinating history on a tour of the ancient Sassi before heading back to the hotel for some relaxation time.

Today will begin with a visit to the picturesque seaside town of Monopoli – where we’ll explore the old town centre and harbour on a walking tour. After that, we’ll move on to Ostuni, the ‘White City’. While we’re here, we’ll learn the secrets behind some authentic cookery techniques at a cooking demonstration (and lunch!) in a traditional masseria. After a busy day, we’ll rest our heads in Lecce.

We’ll embark on a guided tour of magnificent Lecce this morning – where we’ll take some time to explore impressive sandstone buildings, hidden piazzas and winding alleyways. Then: onwards to the historic fishing port of Gallipoli, where we’ve an appointment to keep at an underground olive mill museum – not to mention a walking tour ticking off the likes of the Greek fountain and the cathedral. Accommodation: Hotel Santa Chiara (or similar)

Today we’ll say goodbye to Lecce and set a course for the ‘Pearl of the Adriatic’: Polignano a Mare, where we’ll explore the old town centre and beautiful terraces on a walking tour. This afternoon we’ll trade Polignano for Bari, where a local guide will show us the hotspots – and educate us on the local cuisine as we taste some of the city’s excellent street food. What better way to make ourselves at home?

Next stop: the pretty hilltop town of Minervino Murge. While here, we’ll have the chance to join a basket making workshop before paying a visit to a private wine cellar museum – where we’ll be lucky enough to taste some of the produce in an underground grotto. After that, it’s back to Bari for the grand finale: a farewell dinner and wine pairing, which will be made all the more special by a traditional folk dance performance.

We’ve one final stop to make: the Margherita di Savoia natural saltworks. The largest natural saltworks reserve in Europe, this breathtaking place is the perfect spot from which to spot many bird species. As we come full circle this afternoon, the tour will end.