Welcome to Tuscan Villages, a journey boasting Tuscany’s most amazing towns, villages, iconic landscapes and traditions that have profoundly influenced world culture, art, gastronomy and history through a lifestyle that blends passion with simplicity. Across 11 sensational days, explore the length and breadth of Tuscany and marvel at its beautiful winding roads and fortified hilltop towns; meander the cobbled streets of secluded villages; visit castles; and discover unforgettable tastings in Italy’s most renowned wine region. 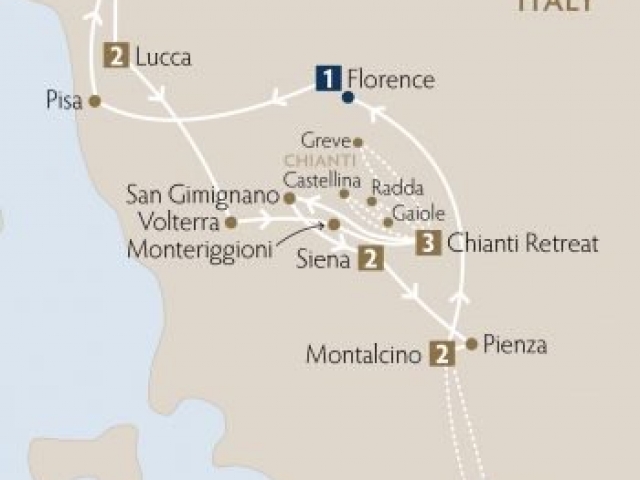 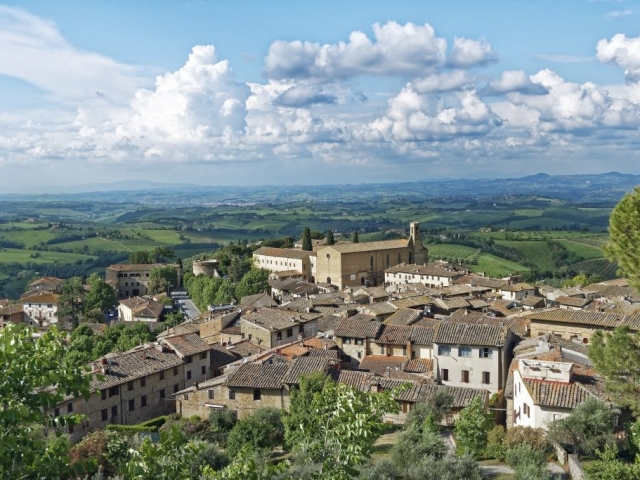 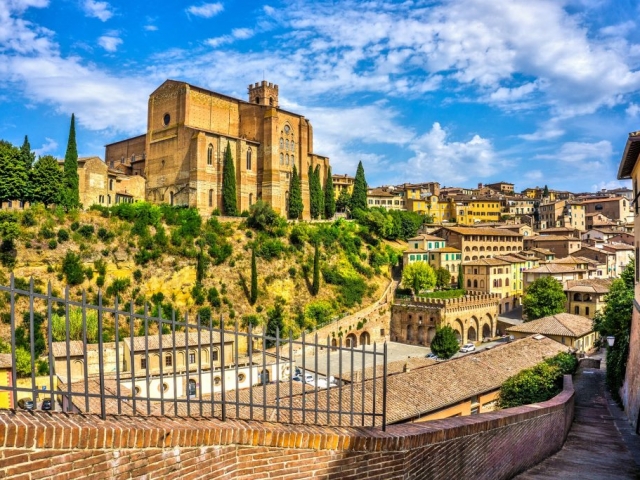 Welcome to Florence, the heart of Tuscany and the perfect starting point for your Tuscan experience. Transfer to your hotel and relax in readiness for tomorrow’s departure. If not partaking in our pre-tour Florence city break, we suggest a visit to Florence Cathedral, Accademia or Uffizi Galleries or simply stroll the streets and take advantage of Florence’s famous leather markets.

Depart for enchanting Pisa to view the Leaning Tower and the Piazza del Duomo, before enjoying lunch at an olive oil producing estate, paired with a tasting and workshop visit. In the afternoon, venture into Tuscany’s Garfagnana region, characterised by is mountainous and densely wooded terrain adjacent to the Northern Apennines. Visit the picturesque town of Barga, awarded an ‘orange flag’ as one the Best Villages of Italy. Afterward, check into your wonderful hotel within the protected walls of Lucca.

Enjoy a morning guided tour of Lucca, famous for its historic centre, medieval towers and best preserved ramparts in Italy. In the afternoon, embrace the opportunity to get lost in the town’s maze of streets, people watch in its famous Piazzas such as Piazza dell’Anfiteatro, Verdi, Napoleone and San Michele or wander along its ancient walls that now serve as a popular pedestrian promenade.

Visit the ancient Tuscan village of Volterra and enjoy a guided tour.An important Etruscan city, Volterra features beautiful winding cobbled streets and artisan craftsmanship, particularly alabaster carvings. The walled mountaintop town’s history dates to before the 7th century BC and contains structures from the Etruscan, Roman and Medieval periods. Afterward, have time to stroll around and enjoy an independent lunch before continuing to the unique medieval walled town of Monteriggioni. Afterward, venture into Chianti to your amazing rural retreat.

B, LCommence your Chianti experience with a visit to Greve in Chianti that was settled well before the Etruscans. The town is one of the main towns in Chianti and is known for its triangular shaped main piazza and Franciscan monastery. Continue for a scrumptious lunch and tasting on a picturesque Chianti winery before returning to your hotel via a short visit to the gardens of Castello di Brolio.

Enjoy the pleasure of a late morning start before visiting the delightful medieval town of Radda in Chianti. Located up on a hill and blessed with panoramic views, enjoy time to wander around and have an independent lunch before continuing to nearby Castello di Meleto for a castle tour and wine tasting on grounds surrounded by vines. Afterward, enjoy dinner in a local restaurant in the endearing Castellina in Chianti.

Bthe Museo Civico and Palazzo del Popolo. Enjoy time to explore the town at your leisure including perhaps, climbing the stairs of one of the towers for a fantastic view. In the early afternoon, depart for Siena, with its maze of narrow streets and alleys converging onto one of Europe’s most famous squares, the Piazza del Campo.

BThis morning, enjoy a privately guided walking tour of Siena’s historic centre, declared a World Heritage Site for its preserved gothic appearance dating from the 12th to 15th century. The tour includes an explanation of Siena’s Contrade or family districts that have existed since the Middle Ages, as well as visits to Siena Cathedral and Piazza del Campo, that hosts the twice yearly Palio horse race. The afternoon is at leisure to wander the cobbled streets of this amazing town.

Travel into the inspiring and amazing Val d’Orcia, a region of Tuscany characterised by gentle cultivated hills, gullies and picturesque villages that have inspired painters through the ages and which is listed as a UNESCO World Heritage Site for its cultural landscape. Visit Pienza, another UNESCO World Heritage Site. Afterward, continue to the world’s most enchanting wine region for lunch and wine tasting at a renowned vineyard. Finish with a brief visit to the town of Montalcino and nearby Abbey of Sant’Antimo before checking into your wonderful retreat.

BVisit two of Italy’s most picturesque villages Pitigliano and Sorano, in the south of Tuscany close to the border with Lazio. Both towns are built into ‘tuff’ bedrock that formed into steep hills from volcanic ash. Enjoy time to stroll both towns before returning to your hotel.

If not continuing with us in Florence, Cinque Terre or to the Amalfi Coast, return to Florence airport, train station for your ongoing journey.

The name of this Italy tour—Gems of Umbria and Tuscany—says it all, as you’ll visit some of the medieval hill towns and see some of the beautiful gems that call central Italy home. You’ll begin and end in Rome, and in between you’ll overnight in Spoleto, San Martino in Campo, Siena, and Orvieto. History fans will be thrilled throughout this Umbria and Tuscany tour. As you travel through the towns in these regions, you’ll learn about the Etruscans, who lived here for centuries before the Roman Empire, and you’ll see remains from periods throughout Italy’s history, including medieval times. 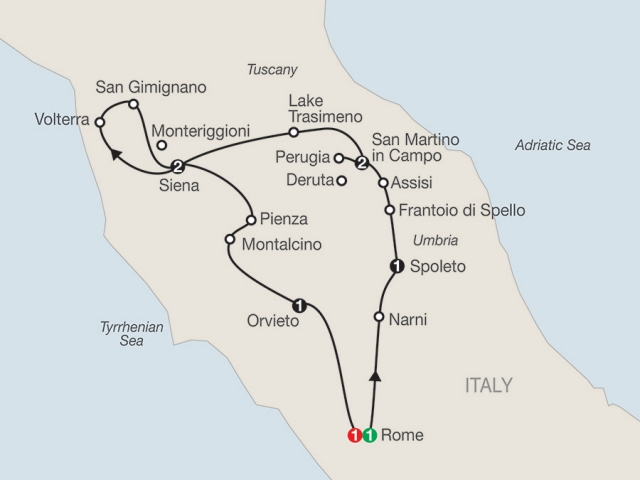 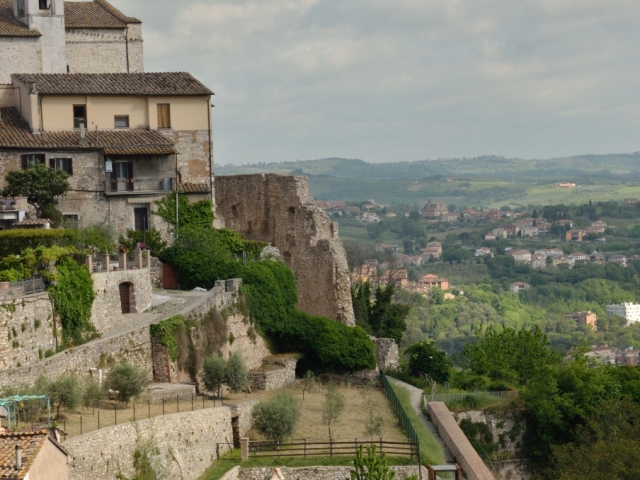 Welcome to Rome! At 5 pm, join your Tour Director and traveling companions, and leave the hotel for a welcome dinner at one of Rome’s lively restaurants.

Your discovery of the green province of Umbria starts in the hilltop town of Narni, almost 800 feet high. Take a guided visit to the Convent of San Domenicobasement, and see a cell where prisoners of the Inquisition wrote graffiti on the walls. Then, a true highlight: learn the art of homemade Manfricolo pasta from a chef during a pasta demonstration, followed by lunch. Next is Spoleto, a former Roman city and capital of an important Lombard duchy from the 6th to the 8th centuries. During your walking tour with a Local Guide, take pictures of La Rocca, the former papal fortress that was used as a high-security prison until 1982; admire the Ponte delle Torri, erected on the foundations of a Roman aqueduct; and visit Piazza Del Duomo. This evening, dinner awaits at Vecchio Camino restaurant.

You cannot leave Italy without trying one of its most important products. Attend an olive oil tasting at an authentic oil mill at Frantoio di Spello. In Assisi, a guided walking tour includes visits to St. Clare’s Church and St. Francis’ Basilica, the hub of a religious order devoted to the ideals of humility, forgiveness, simplicity, and love for all God’s creatures. Arrive at your hotel in San Martino in Campo.

Perugia is the capital of Umbria and an important university town. A guided walking tour features the Piazza IV Novembre, one of the grandest squares in Italy, graced by the Fontana Maggiore (Great Fountain). Admire the gothic cathedral, the Galleria Nazionale dell’Umbria, and Perugia’s stunning medieval municipal palace. Of course, you will taste Italy’s most delectable Baci candy. An optional dinner outing is available

Take a stroll along the promenade of Lake Trasimeno in Passignano on your way to Siena, where your Local Guide will take you for a walk through ancient, narrow lanes to Piazza Del Campo. Hear about the biannual Palio, Siena’s spectacular medieval-style horse race that is held on this square. An optional dinner in Monteriggioni is available.

See some of Tuscany’s loveliest towns during this excursion: start with a visit to Volterra, a former important Etruscan center. Then visit hilltop San Gimignano, the most picturesque of Italy’s perfectly preserved medieval towns with its towers and encircling walls. Return to Siena.

Famous for pecorino cheese, Pienza has been listed as a UNESCO World Heritage Site, thanks to a member of the Piccolomini family who became Pope Pius II in the 15th century and redesigned the town in perfect renaissance style. Continue to Montalcino, beautifully located in the Tuscan Hills, for a Brunello wine tasting, followed by lunch with local specialties. On to Orvieto, perched high atop a volcanic rock, where a unique visit to the Etruscan Underground Labirinto (labyrinth) awaits. This evening, an exclusive dinner has been prepared by the famous Italian chef Maurizio.

Hear the history of this fascinating town from your Local Guide during a pleasant walk through the narrow lanes and visit the cathedral with its San Brizio Chapel. Return to the “Eternal City” for a drive past some of Rome’s main highlights, and a farewell dinner with operatic entertainment at Tanagra restaurant to celebrate your journey to Umbria and Tuscany.