The Treasures of Turkey

A melting pot of cultures, Turkey is fascinating and exotic. With a 10,000-year-old history and more than 40,000 ancient sites, it is one of the oldest continually inhabited regions in the world. Discover its rich history, culture and beautiful landscapes as you journey from the delights of Istanbul to Gallipoli and on down the Aegean coast exploring archaeological sites and into the interior to the magical fairy chimneys of Cappadocia. 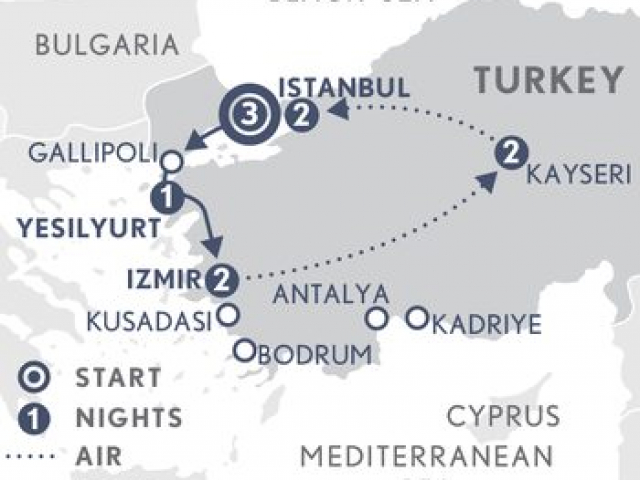 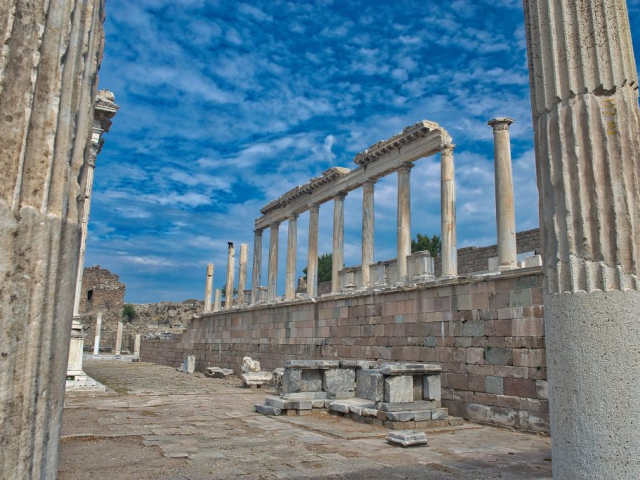 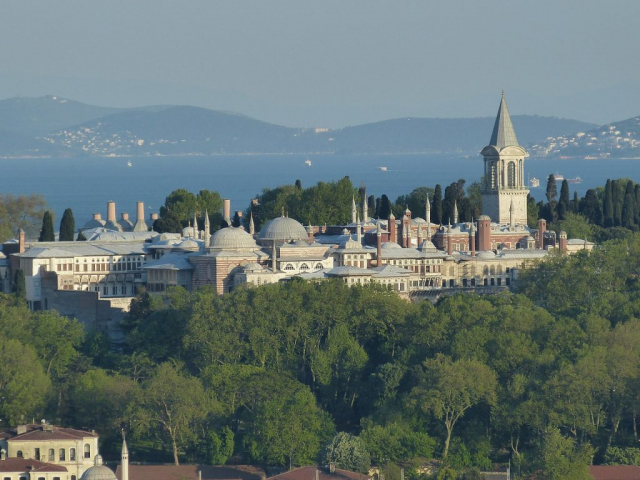 Arrive into cosmopolitan Istanbul, the city straddling two continents. You are met on arrival and transferred to your hotel located in Sultanahmet just steps from the Blue Mosque and Topkapi Palace. Rest of the day to settle in.

Start by visiting the most important landmarks of the old city including the most amazing and inspiring 6th century Hagia Sofia, and the Basilica Cistern – the largest of several hundred that lie beneath the city. Explore the world’s greatest ancient city walls, the Church of the Holy Saviour in Chora, known for its incredible mosaics and preserved now as a museum, and stroll the historic Pera District.

A morning visit to the strategically positioned 15th century Topkapi Palace, the centre of the imperial government and the home of the Ottoman sultans, which overlooks the waters of the Bosphorus on one side and the Golden Horn on the other. In the afternoon continue to the Galata and Karakoy districts before watching the sun set behind the magical domes and minarets as the ferry rides through the evening Bosphorus breeze to Kadikoy, ancient Chalcedon, to explore the market.

Drive west to the Gallipoli Peninsula, site of the infamous World War I campaign which took place between 1915 and 1916. Time at Anzac Cove is certain to inspire emotion as you visit some of the impressively maintained Commonwealth military cemeteries including Lone Pine. Cross the elusive Dardanelles by car ferry and onwards to Troy, where excavations first began in the late 1800’s. The legend of the Trojan War fuelled the imagination of generations: the legendary heroes of the war dictated moral codes of nobility; Alexander the Great’s troops carried a copy of ‘the Iliad’; the Romans believed they came from Troy; medieval kings sought legitimacy by tracing their origins to Troy. Troy is probably the most enigmatic ancient ruin anywhere. Spend the night in a wonderful village named Yeşilyurt on the slopes of Mt Ida where you stay at an attractive boutique hotel renovated out of stone houses of the village.

Be dazzled by the archaeological delights on offer today. Drive across the ‘rolling plains of Troy’, down great country roads, to Assos, which was founded in the 7th century BC and was an important centre in Greek and Roman times. This idyllic site, with its view over the Aegean and Lesvos is spectacular. The city’s ancient walls are among the best preserved in Turkey and the Temple of Athena (530 BC) is sure to impress. Below is the lovely fishing village of Behramkale.

Continue through olive groves past pebbly Aegean beaches and fertile agricultural land to the ancient ruins of Pergamum, a very special ancient city which came into being in a very special way. Unlike other city states, Pergamon was the capital of a mighty kingdom in the centuries between Alexander the Great and Augustus, whose kings were sophisticated men with a drive for art. The wealth from agriculture and the gold mines flowed into artistic creativity of the highest calibre. The site itself is fantastic perched on a 300-metre high hill above lush plains. On the top was the Royal City adorned by wonderful monuments, a large theatre, temples, altars, palaces and the renowned library of 200,000 scrolls, commanding a spectacular panorama. See the Asclepion, the large medical complex fusing sacred and secular practices where Galen worked his wonders. Continue to Izmir and your hotel. If time permits, venture into Izmir’s Agora and bazaars. Izmir is Turkey’s third largest city, but with all the charm of an Aegean settlement. It is a very ancient city, going back at least 5000 years, and is said to be the hometown of Homer. Life here is laid back and the locals enjoy a stroll along the waterside promenade (“Kordon”) especially at sunset over the Aegean.

This morning explore Ephesus, the best-preserved classical city in the Eastern Mediterranean. Dating back to 6000 BC, it was a vast and important seaport during the Hittite Empire and one of the cities settled by the Ionians after they were driven out of Greece late in the second millennium BC by the Sea Peoples. The site was a centre of the cult of Cybele, the Anatolian fertility goddess, from at least the 13th century BC. The Ionians named her Artemis, made her the goddess of the hunt and the moon and built a sanctuary. It was the largest urban settlement in the Eastern Mediterranean and a powerhouse of the ancient world. Later, the roots of early Christianity were found here. Enjoy special access to the Terrace House excavations where beautiful mosaic floors and frescoed walls have been unearthed, followed by the museum and the Temple of Artemis. On Saturdays and Wednesdays, explore the weekly farmer’s market of Selcuk.

Fly to Kayseri (via Istanbul) in central Turkey, to the remarkable area known as Cappadocia. Millennia-long volcanic activity followed by an on-going process of erosion and contraction of the volcanic remains into a soft porous stone named tuff, have together created a landscape ‘more unique’ than any other. The valleys of tuff filled with ‘fairy chimneys’ became, at the hands of expert carvers, cave dwellings, monasteries and chapels, cellar villages and more. During your visit, explore one of the most extraordinary treasures of sacred art: the rock-carved churches of Goreme, now an ‘open-air museum’. Some of the finest examples of ninth and tenth century Byzantine wall painting are to be found in the churches of Cappadocia. What survives at Goreme and other sites scattered about Cappadocia marks out the region’s rock-cut churches and chapels as one of the greatest museums of medieval art in the world. Your visit will include the Dark Church – one that has been beautifully restored inside to its former stunning glory.

Once heart of the ancient Hittite Empire and later a strategic point on the Silk Road, Cappadocia has an incredible historical heritage. Today, visit another marvel of the region: the ‘underground city’ at Kaymakli. The enigmatic cellar villages, over 40 of which have been discovered empty, are among the wonders of Cappadocia. The extensive network of rock-carved subterranean tunnels and hallways, storage and sleeping cells, air shafts and chapels is over 40-metres deep. With your guide, you will follow an illuminated trail and descend 20-metres. The implicit purpose and the date of the construction of these ‘underground cities’ is a mystery to this day.

Later, visit Avanos, a town on the Red River, well known for its pottery. Visit a workshop and learn about this traditional craft; even try your hand at the wheel.

Fly back to Istanbul and to your hotel. This afternoon explore the Dolmabahce Palace, the largest and the finest example of the Ottoman New Baroque in the city, a monument to Turkey’s westernisation. Its halls, chambers, gardens and baths are beyond comparison. Exploring Dolmabahce will present the connecting link between the classic Ottoman tradition and modern Turkey. After a short stop at the Maritime Museum to see the amazing collection of incredible old royal barges, explore the chic Nişantasi district, boasting elegant boutiques and espresso bars, reflecting another of the city’s thousand faces.

The Ottoman Empire reached its zenith in the 16th century. The royalty and the elite competed in embellishing the capital with wonderful mosques, schools, bathhouses and fountains. This was their Golden Age, and the master architect of this age was Sinan (1491-1588), said to be the greatest master builder of all time. Today you explore the Age of Sinan in Istanbul’s imperial mosques and bazaars.

Visit Suleymaniye Mosque which is undoubtedly the most dignified building in the city. Symbolising the Ottoman glory of the reign of Sultan Suleyman the Magnificent, Suleymaniye is a miracle created by the great architect. Visit the glorious Rustem Pasha Mosque, another architectural delight from the Ottoman era, known for its outstanding Iznik tiles. Savour the sights and smells of the Spice Market where you are encouraged to taste the local delicacies. The most dazzling of all the bazaars is the Grand Covered Bazaar, built in 1461, and in service ever since. It contains 3,500 shops employing more than 20,000 people all under one roof; an average of 450,000 walk-ins every day animate the beautifully painted arches and columns. Everything imaginable is for sale, gold and silver jewellery, rugs, carpets, antiques, tiles, leather, souvenirs, but just seeing and experiencing this mother of all bazaars is worth the trip.  In the late afternoon, take a private cruise on the Bosphorus against the majestic skyline of Istanbul and watch the splendid mansions, Judas blossoms, forts and palaces pass by. Created by a cataclysmic flood some 7,700 years ago, the strait connects the Black Sea with the Mediterranean and is one of the busiest waterways in the world. The strategic importance of the passage has always been of enormous proportions and its feature of a long and deep harbour (‘Golden Horn’) gave reason for the creation of a city.