Journey through a nation of ecological, cultural and gastronomical treasures and you’ll agree Colombia is Latin America’s best kept secret. From the cool European style of the capital to the fertile coffee country and the unique landscapes studded with palm trees that touch the clouds. Brightly coloured villages, urban street art and show-stopping museums reinforce the country’s rich artistic traditions. 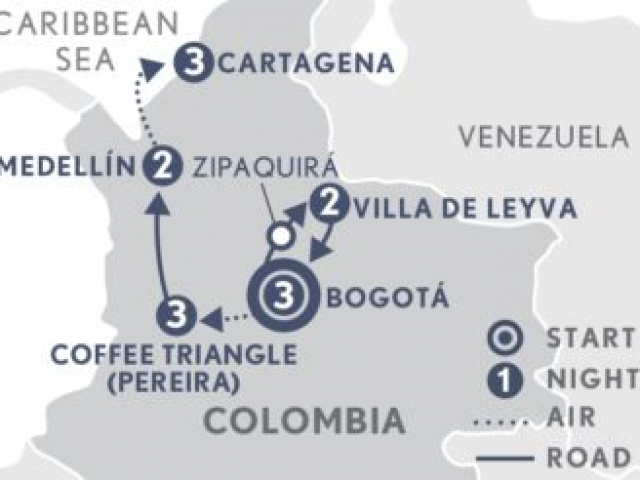 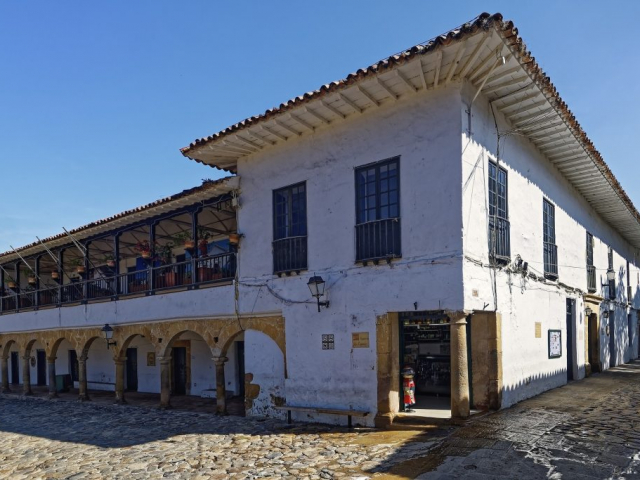 Welcome to Bogotá, Colombia’s vibrant capital, located at 2,640 metres, on one of the Andes’ many high plateaux. On arrival at El Dorado International Airport meet your A&K representative who will transfer you to your colonial style accommodation in walking distance of the gourmet zone recognised for its wide selection of restaurants. Stroll out on your own, soak up the cool European atmosphere filled with museums, street art, markets and cafés, and perhaps even taste your first unforgettable Colombian coffee.

Set out on a ‘Weaving Peace’ day tour, visit key historical sites and learn about key moments of Colombia’s history – culminating in the signing of a Peace Agreement in 2016. This unique, immersive experience visits the Parque Nacional to understand Colombia’s political struggles before continuing to the Café Wasikamas, where an indigenous community serves special coffee grown in the mountains of southern Colombia. Stops are also made at Plaza Bolivar and the Toma Del Palacio de Justicia, the chocolate district, and the ‘Museo Nacional de Colombia’, Colombia’s National Museum to appreciate the price-winning textiles of the Tejedoras de Mampuján, a group of afro women from the Caribbean who received the National Peace Prize.

Afterward, enjoy lunch at Salvo Patria, a restaurant with a native-food rescue philosophy where you will have the chance to talk with the chef about how the restaurant builds value chains with small producers to reactivate rural areas. Return to your hotel early afternoon.

Spend the morning admiring the pre-eminent collection of artworks housed in The Museo Botero, an old colonial residence showcasing Botero’s works as well as his private collection including Picassos, Renoirs and Monets. Afterwards discover some 32,000 pieces of incredible pre-Hispanic gold artefacts glittering within The Museo del Oro.

The afternoon is free to enjoy at leisure or explore the city your way. Uncover Bogotá’s eclectic street art scene on a bike tour of graffiti hotspots. Discover the city’s unique art culture as a local art dealer takes you to hidden galleries and ateliers. Or get a taste for Colombian cuisine on a gastronomic walking tour of five family-run eateries. Later this evening, learn the dance of passion in a local home before swinging your hips with Bogotá’s salseros in iconic salsa clubs.

Head north through the Bogotá Savannah, where many of the country’s flowers are grown, to Zipaquirá, home to one of Colombia’s most revered attractions: the underground salt cathedral. Navigate your way through underground tunnels to the gigantic cross crafted in salt by the Colombian artist Carlos Enrique Rodriguez – the largest of its kind in the world.  Continue onwards to Villa de Leyva, one of the area’s most picturesque towns and your boutique accommodation.

Villa de Leyva was founded in 1572 and declared a national monument in 1954. Explore its Spanish-style houses and winding cobblestone laneways by foot accompanied by your private guide. Discover how it got its name and the important role it played in independence from Spain. Learn the art of handmade ceramics in Ráquira town, which in local language means the “city of pots”, before enjoying lunch sampling the famous longaniza and morcilla spicy sausages of Sutamarchán town.

Begin early for your private return journey to Bogotá, stopping en route to admire the religious artwork of the 17th century Convento del Santo Ecce Homo. Proceed to Bogotá Airport for your flight into Pereira, the gateway to Colombia’s coffee country. On arrival a private transfer whisks you to your hacienda style accommodation. The coffee region is recognised by UNESCO for its strong cultural identity and is topographically striking – verdant slopes, rural hamlets and the Andes in the distance.

Climb high into the steep volcanic hills to visit the coffee finca of Hacienda San Alberto. Here, you’ll learn about coffee in all its stages – from the sweet red fruits the beans start off as on the branch, to sorting, roasting, grinding and brewing. Fuelled by a coffee tasting and lunch, move onto Pijao, a city where the living is slow, and the locals are gracious. Be welcomed into the homes of several families; taste home-made beverages using produce from their treasure-filled gardens and get a unique taste of life in Latin America’s first “Slow City”.

Journey to the rolling green foothills of the Colombian Andes to the Valle de Cocora, home to the world’s tallest palm tree, the Quindian wax palm. Explore the cloud forest on foot and learn firsthand why Colombia is the second most biodiverse country in the world. Later, explore the vibrant traditional towns of Salento and Filandia, and even dare to sample some local spirits before your return journey.

Begin early with a visit to Finca Romelia, home to some 6,000 orchids. Meet José and Maria and learn the story of their private collection, which spans 832 different species and 6,000 orchids in total. After sampling their home-grown produce, travel onwards to Medellín and your villa accommodation. Known as the City of Eternal Spring, Medellín is a city fizzing with civic pride, arts and innovation. Drop your bags, unwind in the lush tropical gardens or step out and explore the buzzing neighbourhood.

Begin your day with a visit to a community project to learn about the incredible changes in the city since the death of Pablo Escobar. Stop and discover the public renovation projects, recreational and educational spaces that have improved the quality of life of its inhabitants. Interact with members of a local business to see the positive impact on life and family.  Spend time admiring some of the best street-art murals in the world. Afterwards, try your hand at creating gourmet masterpieces in a community cooking class using local ingredients. Enjoy a tram ride and floating over colourful rooftops in a cable car to gain a whole new perspective of a city reborn before an afternoon exploring other sites showcasing the dramatic changes in Medellín since the early 1990’s, when it was considered one of the most dangerous cities in the world.

Private transfer to Medellín airport for your flight to the vibrant port city of Cartagena, the jewel in Colombia’s crown. Considered one of the most exquisite colonial cities in Latin America, it is famous for its pastel coloured colonial-era architecture, bougainvillea draped balconies, cobbled streets and the grand churches of its old walled city. Proceed to your luxury small hotel at the heart of Cartagena’s handsome old town, a UNESCO World Heritage site. This evening is a chance to relax with a glass of wine on a cruise along Cartagena Bay before dinner at Interno, Latin America’s first restaurant inside a prison, tended by its women inmates. It is a model of social reintegration designed to improve the quality of life of prisoners and their families.

Start your day off with a panoramic view of the city and port zone from the Monasterio and Iglesia de La Popa before exploring the hilltop San Felipe Fortress, built to defend the city from pirate attacks. Walk around the fortress and learn how the castle was constructed, the engineering feats, the tunnels, underground galleries and passageways. Continue to the Old City and admire the Convent and Church of San Pedro Claver built in the middle of the 17th century. Explore the handicrafts zone of Bovedas, a collection of archways built into the city wall, that were used until the end of the 1700s to house armaments and later as a prison. Nowadays it’s an artisan centre where visitors can appreciate the local handicrafts.

Enjoy lunch at Club de Pesca, one of Cartagena’s most traditional and famous restaurants located right in front of the picturesque Bay of Cartagena, before an afternoon spent exploring the city’s colonial district. Soak up the atmosphere at Bolivar Park, shaded by large trees with four fountains and a statue of the great Liberator. Discover treasures in the 16th century Santo Domingo Church, and understand the history in the aptly-named Inquisition Palace, recognised for its large Baroque style door and the prison and torture chambers of presumed opponents of the Catholic Church.

Appreciate a day at leisure to choose to spend it your way. Stroll the cobblestone streets and continue exploring the many highlights of Cartagena’s colonial district. Alternatively choose to join a gastronomic walking tour and feast on the city’s unique fusion of Spanish and African flavours or take in the nearby National Aviary of Colombia where more than 135 species of birds can be observed in their natural habitat.

Private transfer to the airport for your onward journey.