There is nothing quite so rewarding as journeying through the rugged tracks of Far North Queensland. Venture to the northernmost tip of Australia and discover one of the wildest tropical environments on Earth. Soar over Cape York and the Torres Strait Islands in a Helicopter, wander through ancient rainforests, and admire Indigenous Rock Art. 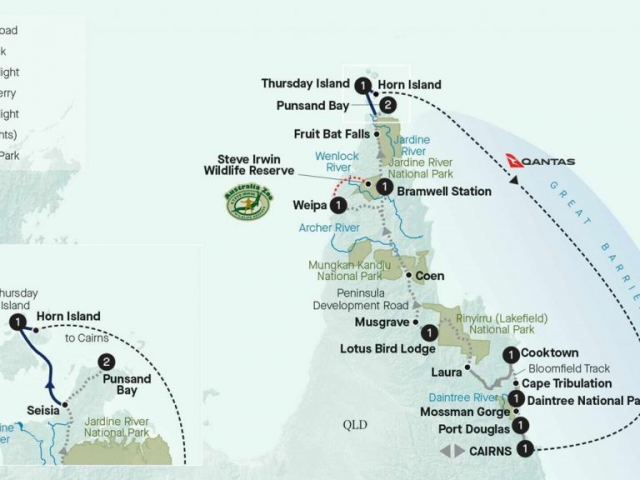 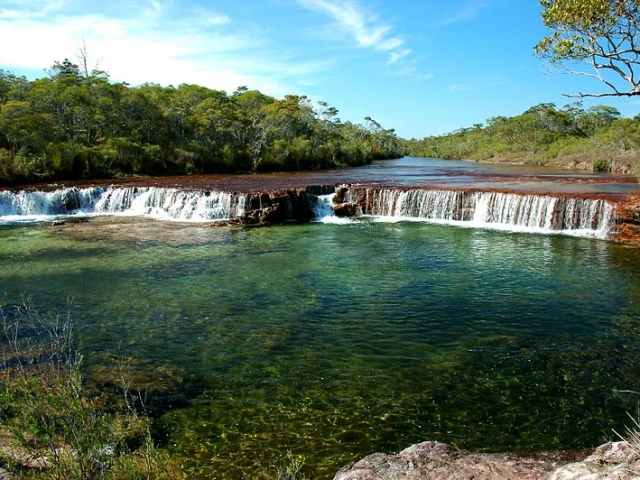 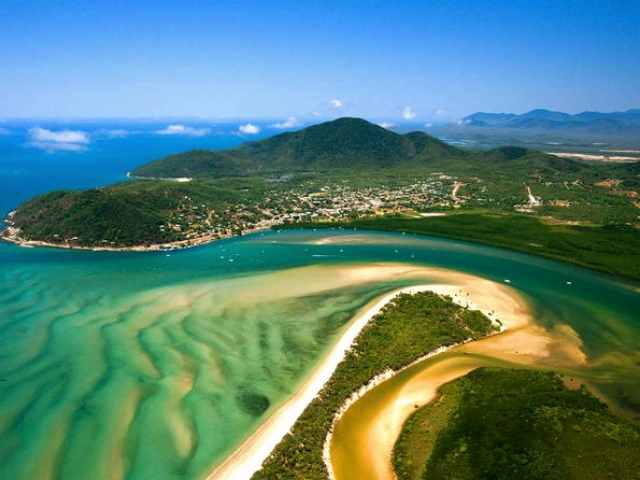 Your adventure begins in Cairns today, where we meet you on arrival and transfer you to your resort in Port Douglas. The remainder of the afternoon is yours to spend at leisure. You might like to go for a dip in one of the resort’s many pools, or head into Port Douglas for a wander through town. This evening, a relaxed welcome dinner provides the perfect opportunity for you to meet your fellow travellers.

Travel to Mossman Gorge in Daintree National Park and set off on the Ngadiku Dreamtime Gorge Walk, led by local Indigenous guides. Start with a smoking ceremony, before journeying along private, gentle tracks visiting culturally significant sites. Learn about traditional hunting and gathering techniques, hear stories of the Dreamtime and gain a deeper understanding of how the indigenous people have lived off the land here for thousands of years. Later, embark on a Daintree River Cruise and keep an eye out for crocodiles, birds, butterflies and a variety of reptile species. Tonight, dine amidst the rainforest in an open-air restaurant.

Explore Cape Tribulation this morning, the only place in Australia where two World Heritage-listed phenomena meet – the Daintree Rainforest and the Great Barrier Reef. Journey along the Bloomfield Track, one of Australia’s most iconic outback roads. Later Journey through dense sections of rainforest, tackling steep climbs and several challenging creek crossings. Afterwards, arrive in Cooktown and discover the Cooktown Botanic Gardens and the James Cook Museum. Just before sunset, savour views from Grassy Hill Lookout over the Endeavour River.

Travel to Quinkan Country, ranked as one of the top 10 rock art areas in the world by UNESCO. Here, embark on a walk with an Indigenous guide to Split Rock, an intriguing rock art site where Quinkan figures depicting native animals, spirits and totems have been painted onto the rock face. Afterwards, continue your journey to the Old Laura Homestead. Later, turn off into Rinyirru (Lakefield) National Park, home to crocodiles, wallabies and an array of bird life. Afterwards, arrive at Lotus Bird Lodge and retreat to your log-style cabin before a nature walk around the property’s serene billabong. Set amidst shady eucalyptus trees, the aptly named Lotus Bird Lodge is a birdwatcher’s paradise. During your stay, be sure to keep an eye out for kites, kookaburras, egrets, goshawks and jabirus.

Journey to Musgrave, the only remaining overland telegraph station on the peninsula. Explore the old gold mining town of Coen and stop at the well-known Archer River Roadhouse for lunch, which marks the halfway point of your journey. Afterwards, continue to the town of Weipa, home to the largest community on the Cape York Peninsula. Here, set out on a sunset boat trip and relax as you learn about the region’s unique ecosystem, mining industry and Indigenous culture. Enjoy nibbles and drinks on board as you keep your eyes peeled for crocs lazing on the banks.

Today is sure to be one of the highlights of your journey as you enjoy a visit to the Steve Irwin Wildlife Reserve, which is normally off-limits to the general public. Board a helicopter in Weipa and fly into the reserve, gaining an aerial perspective on this vast wilderness area. On arrival, you’ll be welcomed by a ranger from Australia Zoo, who will provide an introduction to the wildlife and sonar detector tracking methods. After lunch at Camp Coolibah, discover the movement of the crocodiles in the area and the endangered Speartooth Shark. You’ll also see a demonstration on how crocodile cages are deployed and operated. Later, visit Bluebottle Creek and uncover the geology of the region, the significance of bauxite and how the plateau filters water to ensure survival of endangered species. You will also learn about bush tucker and the native flora, including the Sarsaparilla Bush and Hanguana Malayana.

Observe the towering termite mounds of Bramwell Junction before continuing on with your adventure. Stop at Fruit Bat Falls and cool off with a refreshing swim in the pristine waters of the Elliott River. Cross Jardine River by ferry, then skirt Jardine River National Park and continue through the traditional land of the Injinoo Indigenous people.

Awake this morning to sweeping views of the tip of Cape York and travel along a 4WD track to Frangipani Beach. Take a mildly challenging but thoroughly awe-inspiring walk to the tip of the peninsula to experience being at the Australian mainland’s most northerly point. Take in the stunning vistas over the Torres Strait, then afterwards, take to the skies as you embark on a scenic helicopter flight over the tip of Cape York. After your tip of Cape York experience, travel to historic Somerset Hill, the site of a station established by John Jardine in 1863. On Somerset Beach, admire Albany Island, as well as discover the history of ‘Jackey Jackey’ and Frank Jardine.

Ferry across Endeavour Strait to Thursday Island, which was once a base for pearling luggers. Step back in time with a visit to Green Hill Fort, located atop the island’s highest hill. Once used as ammunitions storage, the fort’s maze of underground tunnels and rooms now house the Torres Strait Museum. Admire views of the mangrove-covered coastlines, azure waters and golden-sand beaches before visiting the local cemetery to see the memorial to the Japanese Pearl Divers. You’ll also enjoy time at the Gab Titui Cultural Centre.

Transfer to Horn Island aboard the local ferry. On a guided tour, visit the World War II Base and Torres Strait Heritage Museum, and learn how the island became an operational airbase following the bombing of Darwin. Later, board an included Qantas flight from Horn Island over the Great Barrier Reef and marvel at this spectacle from the air before arriving in Cairns. Reunite with your driver and later, toast the end of your adventure with a farewell dinner.

After breakfast this morning, be transferred to Cairns Airport for your onward flight.