On this 11 Day India’s Golden Triangle & Tiger Safari discover thriving cities, spectacular palaces and forts, and have the chance to see a tiger in the wild. The tour culminates with an exclusive stay in a 200-year-old palace. 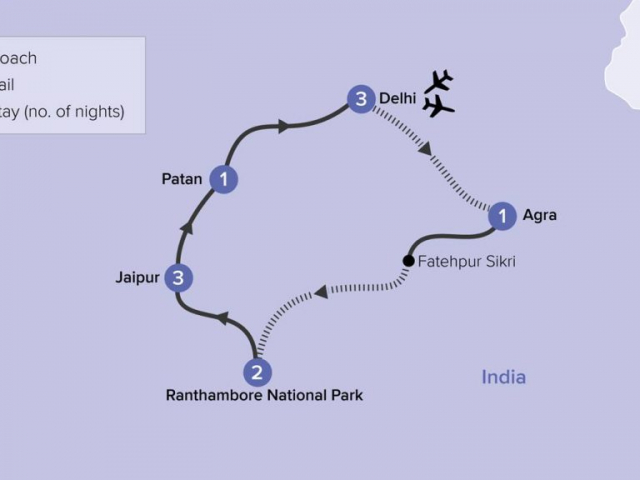 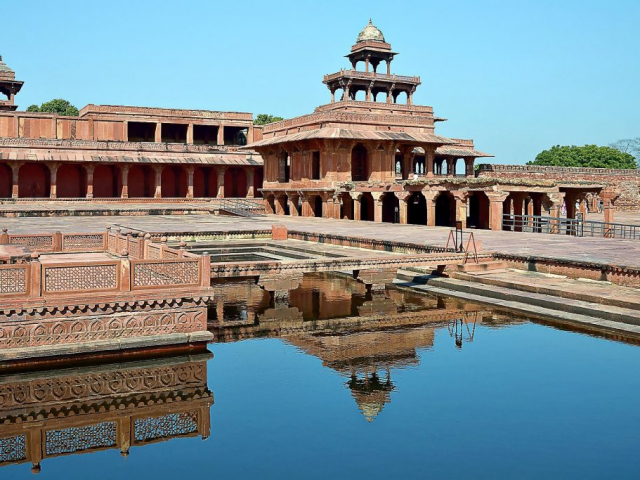 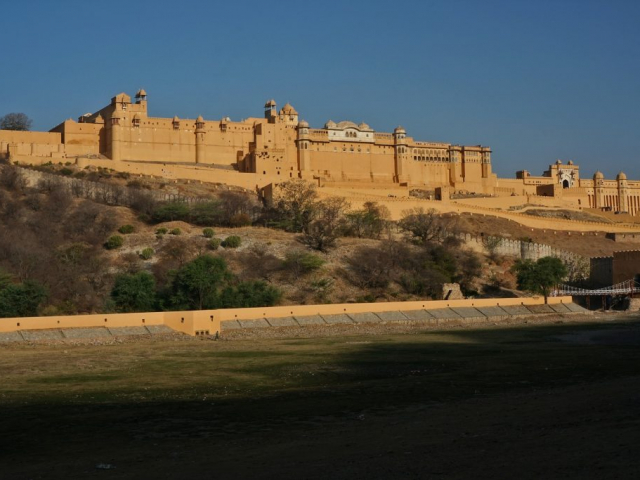 Upon arrival at the airport, you’ll be transferred into the heart of India’s bustling capital, home to around 25 million people. Here, you will spend three incredible nights.

Enjoy a free day to settle in and explore Delhi at your own pace. Perhaps explore Chandni Chowk, one of the city’s oldest and busiest markets, filled with food carts, sweet shops and spice stalls. This evening, meet your Great Rail Journeys Tour Escort and fellow travellers at a Welcome Dinner.

Today you will further explore Delhi, India’s vibrant, hectic, awe- inspiring capital city. Visit Jam Masjid, a 17th century mosque, before taking a fascinating rickshaw ride through the narrow streets of Delhi’s lively bazaar, winding through a sea of pedestrians going about their everyday lives. Leave the enticing aromas of street food behind and move on to New Delhi, where you’ll see Humayun’s Tomb and Qutab Minar – India’s tallest stone tower. Other highlights include the triumphal India Gate, the Parliament Building and Rashtrapati Bhawan, the home of India’s president.

Today you will have your first taste of rail travel in India as you board the Gatimaan Express to Agra, home to the truly magical Taj Mahal. On arrival, head to the enormous Agra Fort, an impressive maze of buildings constructed in 1565 under Emperor Akbar. Afterward’s it’s time to see the iconic Taj Mahal. The sunset visit ensures you experience the magical aura as the sun’s final rays catch the natural pink and red hues of the white marbel. Created by the Mughal emperor Shah Jahan as a mausoleum for his beloved wife, the architectural masterpiece took at least 20,000 people and 22 years to build. Later transfer to your hotel in Agra.

Your day begins with an excursion to Fatehpur Sikri. Built in the 16th century as the brand new capital city of India, Fatehpur Sikri was abandoned after only 14 years of rule when local water supplies ran dry. The deserted city has been preserved in almost the exact state it was left in 400 years ago, and provides a fascinating glimpse into life during the time of the Mughal Empire. After time to explore, continue to Bharatpur to have lunch together at a local restaurant. Later, travel by train to Sawai Madhopur, then transfer to the Taj Sawai Madhopur Lodge, once a hunting lodge for the Maharajas.

Arise early and head into the Ranthambore National Park for an early morning game drive. Ranthambore National Park is home to many rare creatures including leopards, panthers, hyenas, marsh crocodiles and sloth bears. The park’s most popular resident and its star attraction is the elusive Bengal tiger. It is one of the only places in India where the incredible tiger can still be found in the wild. To increase your chances of seeing all of the magnificent animals at the park, you will embark on a second game drive in the afternoon.

Today, travel to Jaipur, the capital of Rajasthan, known as the ‘Pink City’. In 1876, the reigning Maharaja ordered the entire city to be painted pink, the colour of hospitality, to celebrate a visit by Queen Victoria and the Prince of Wales. The tradition has been followed by the residents of the old town, who are now obliged by law to maintain the pink colour. On arrival, check in to the Hilton Hotel in Jaipur. Your home for the next three nights, this modern upscale hotel is the perfect base for an afternoon of exploration.

This morning embark on an exciting sightseeing tour of Jaipur. First, head to the grand City Palace, which is home to the current Maharaja of Jaipur. The ornate building was completed in 1728, and is now surrounded by high walls and fine gardens. Visit the early 18th-century Astronomical Observatory, a splendid complex featuring a number of early geometric devices for tracking locations of planets. Next, it’s off to the spectacular Palace of the Winds, an opulent red and pink sandstone building created for royal ladies to overlook the city without being seen. The afternoon is yours to spend at your leisure.

Today, head to the ancient village of Amer, to visit the remarkable Amber Fort. Located high on a hillside, the fort traditionally served as the royal stronghold, before Rajasthan’s capital relocated to Jaipur. After ascending to Amber Fort by Jeep, you are free to stroll through the sprawling complex of courtyards and halls. Bask in the incredible views of the fortifications on the surrounding mountains. The imposing exterior of the Amber Fort contrasts with its intricate and detailed interior. Many of the rooms have elaborately painted walls inlaid with decadent mirrors and precious stones. Afterwards, the rest of the afternoon is at leisure.

Travel to the town of Patan after breakfast. On arrival in Patan you will be transferred by camel cart to the Patan Mahal Palace Hotel. Built around 1790, shortly after the battle of Badal-Mahal, the Patan Mahal Palace has been lovingly turned into a heritage hotel. As befitting visitors to a palace, you’ll receive a royal welcome when you reach the grounds and be decorated with flowers. This afternoon, enjoy a guided walking tour of Patan town, a wonderful opportunity to see life in an unspoilt rural Indian town. There is then the opportunity to continue to Badal Mahal, an 800-year old palace, where you can admire the stunning views of the town and the surrounding mountains. Be indulged with a gala Farewell Dinner on the grounds of the palace hotel, a fitting end to our Indian odyssey.

This morning after breakfast, we bid farewell to Patan and drive to Delhi airport for your onward flight.