Discover ancient history and biblical sites with beautiful desert landscapes on a 10 Day Jordan Uncovered tour.  Wander down ancient Roman streets, dine on traditional cuisine and marvel at some of the starriest skies on earth. The hospitality of the Bedouin will win you over and you’ll be amazed to discover a 60-year-old wine industry. Unexpected delights abound in this extraordinary desert kingdom. 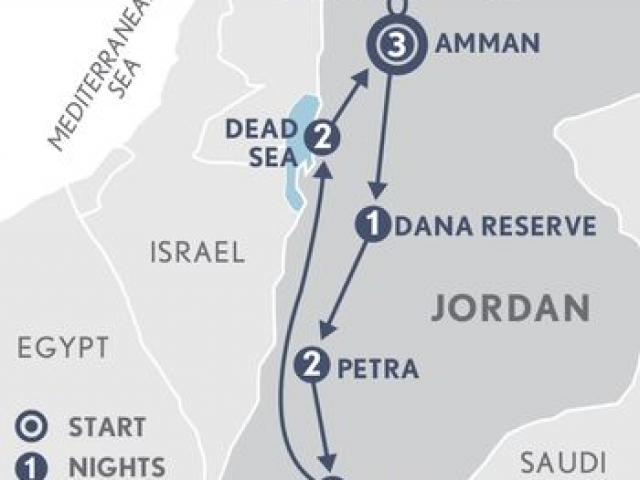 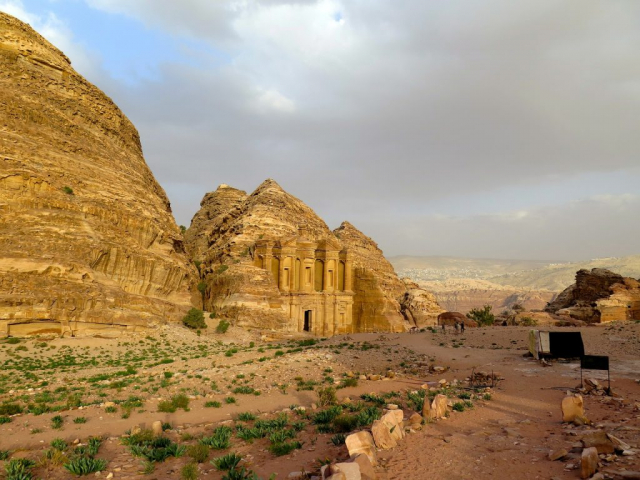 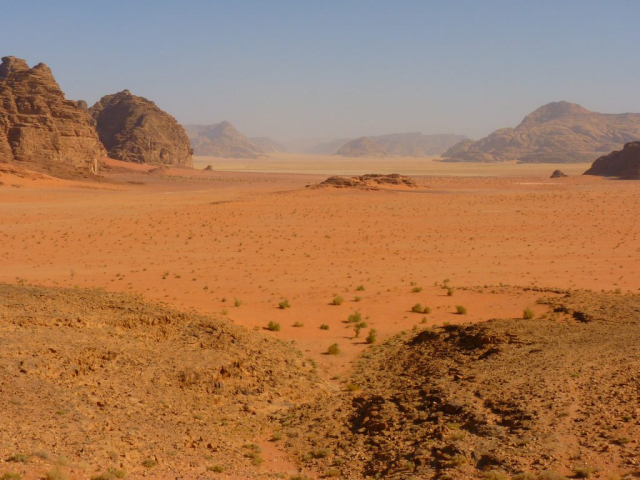 On arrival in the Jordanian capital you are met and transferred to your downtown hotel. After time to settle in, step outside and wander on your own through the city’s most affluent neighbourhoods just a short stroll from the hotel. Search out Jordan’s most famous dish, Sufra, a tasty combination of cooked rice, yoghurt and lamb. Alternatively relax at the hotel and enjoy the diverse range of gastronomical experiences on site.

Travel north to Jerash, an extraordinarily well-preserved ancient city, acknowledged to be one of the best-preserved Roman provincial towns in the world. Explore the iconic temple of Artemis at the highest point of the city, the long colonnaded street, with its original stone paving, and the monumental Hadrian’s Arch built to celebrate a visit by the emperor himself – all which were hidden for centuries in the sand before being excavated and restored some 70 years ago.

After lunch return to the modern, bustling capital and discover Tiraz, an intimate museum housed in a converted villa, with an extensive collection of Palestinian, Jordanian and Arab dresses and costumes. Meet the curator, share a tea in the garden and gain a glimpse into Jordan’s disappearing heritage. Continue to an exclusive wine tasting experience. Established in the 1950’s, Jordan River Wines boasts the country’s finest state of the art winery. The climate and basalt desert combine to provide one of the world’s most distinctive terroirs growing more than 40 grape varieties, which are handpicked and crafted into more than 20 wine varietals.

Journey west today to the nearby valley of Wadi Essair, where you visit the ancient caves of Iraq El-Amir and the important Hellenistic ruins of Qasr El-Abd (Palace of the Slave). Spend some time exploring before an inspiring visit to the Iraq Al-Amir Women’s Cooperative. Founded by the Noor Al-Hussein Foundation in 1993, the centre helps local women become financially independent, raising living standards and preserving local heritage. Meet the women over a traditionally brewed coffee, hear their stories and take part in a workshop. Learn about their handmade fabrics, naturally produced soaps, pottery and ceramics, papermaking and cooking. Enjoy a delicious lunch prepared by the women including flat breads and dishes featuring local grown vegetable and spices.

After lunch venture up to the citadel, situated on one of the seven hills that originally made up Amman, a good place to begin a tour of the city’s archaeological sites: the regal columns of a Roman temple in silhouette against the sky, the elegant capitals of a Byzantine church, endlessly inventive carvings in the Umayyad Palace, and digs and ruins everywhere you walk. Spend time wandering through the National Archaeological Museum, home to a collection of artifacts which date from prehistoric times to the 15th century. Take a seat in the magnificently restored 6,000 seat Roman Amphitheatre built during the reign of Antonius Pius in 138-161 CE. Lastly today, stroll through Darat al Funun arts centre, housed in a series of restored sandstone residences and warehouses, which provides a collaborative platform for contemporary Arab artists.

Leave the city behind as you begin your adventure to an idyllic and isolated ecolodge on the south western edge of Dana Biosphere Reserve. Travelling south along the King’s Highway, stop en route at Mount Nebo, where Moses is said to have gazed upon the Promised Land, and which has since become an important pilgrimage site. Accompanied by your expert guide, visit the “Church of Moses”, built by the first Christians, which houses some beautiful mosaics and marvel at the breathtaking views over Jordan, the Dead Sea and Israel. Next stop is Madaba, the “City of Mosaics”, which perches on a 4,000-year-old archaeological site.

Step inside St. George’s Church which houses a world-famous mosaic floor containing a large mosaic map of Palestine, which also features a detailed map of Jerusalem as it was during the sixth century. At the Church of the Apostles, at the southern entrance of the city, a mosaic floor can be found attributed to the craftsman Salamanios, depicting the sea, with the central figure of a woman encircled with a selection of creatures, vegetation and an inscription.

Savour a traditional Jordanian lunch in a restored Ottoman house in the village of Haret Jdoudna before continuing to Dana Reserve and your overnight stop. Following dinner, relax on the rooftop terrace for some incredible stargazing. A powerful telescope reveals incredible views of the constellations.

Lace up your walking boots this morning for a hike to the old copper mines admiring the impressive hill of Khirbet Feynan, with its Byzantine churches and graves along the way. Return to the lodge where a well-earned lunch will be served before heading onwards to Petra, the country’s most famous archaeological site and one of the New Seven Wonders of the World. Tonight, A&K will arrange for you to eat at the home of a Jordanian family, to experience the incredible hospitality that is so much a part of everyday life in Jordan.

Explore on foot the many wonders of the ‘Rose-Red City’, one of the most famous UNESCO World Heritage Sites in the world. Established as the capital of the ancient Nabataeans, it was an important stop on the caravan route between Asia, Arabia and Europe. Discover tombs, temples and exquisite monuments hewn out of the surrounding mountains. Whilst the entire site is extraordinary, the most well-known structures include the Treasury, accessed through the narrow ‘siq’ – a naturally occurring geological rift between the mountains, the Roman Theatre, the Corinthian and Palace Tombs and the Roman Road.

Refuel with lunch at the Basin Restaurant amidst the ruins before continuing your explorations. Climb the 1,200 steps to one of the ancient city’s most awe-inspiring monuments, the Monastery. With a massive facade almost fifty metres square, carved out of the mountain, the summit offers spectacular views.

Your morning is at leisure or alternatively, you may like to venture back into Petra to explore more of this incredible ancient site. Leaving town early afternoon, drive on to Little Petra, a miniature version of the great site containing a number of notable tombs as well as some excellent viewing points. Like Petra, it is believed the site here dates back to the first century and may have been a suburb of the larger city where the merchants lived. Continue south to Wadi Rum, setting for the epic 1962 film ‘Lawrence of Arabia’ and more recently ‘The Martian’.

Discover impressive red desert landscapes, huge rock formations, narrow canyons and Bedouin tents on a two-hour 4WD excursion. Finish the day with a cup of Arabic coffee or mint tea with the Bedouins while the sun sets behind the mountains of Wadi Rum. Arrive at your tented camp in time for dinner of Middle Eastern cuisine and then relax and enjoy the peacefulness and serenity of the desert.

Wake early and join in a sunrise yoga session or simply witness the changing colours of the landscape. Continue your journey across an arid landscape with strangely shaped mountains to the lowest point on the earth’s surface, the Dead Sea. At more than 400m below sea level, it is known for its highly salty waters. Spend time in arguably the most luxurious resort on the Dead Sea.

A day at leisure to enjoy the resort’s lavish facilities and soak up the mineral rich waters whose medicinal qualities have drawn visitors to the area for millennia. Swimming here, with its odd sensation of weightlessness, is a memorable experience. The high levels of salt in the water are nearly 10 times that of the ocean and keep the body afloat, whilst the variety of minerals, including magnesium, sodium, potassium and bromine, promotes health and wellbeing.

Your A&K journey concludes with a private transfer to Amman and the airport for your onward journey.