Glamour, picturesque villages and stunning mountain scenery: this tour through the French Riviera and Provence is sure to impress with its diversity and dramatic beauty! Join us as we experience the luxury of the French Riviera, marvel at the architecture of Avignon and venture into the mighty Gorges du Verdon – soaking up some fascinating history along the way. 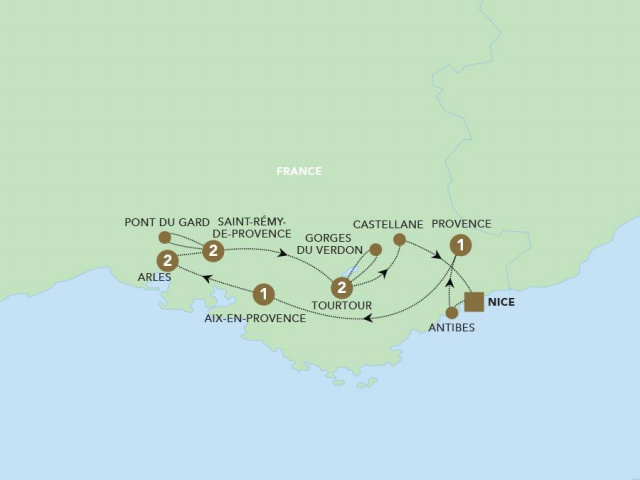 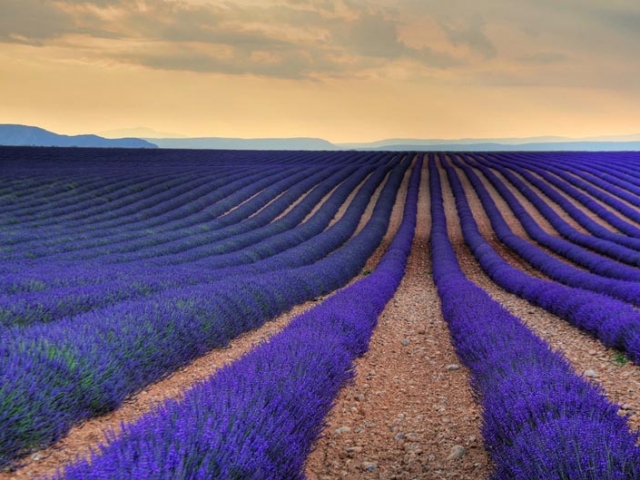 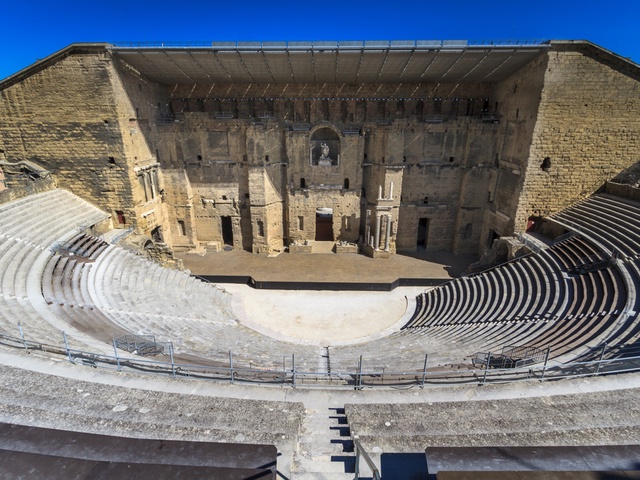 After meeting the group in Nice, our first stop will be Antibes – where we’ll take some time to stroll the picturesque old port. Then, it’s onwards to Saint-Paul-de-Vence, one of the region’s older medieval towns, where we’ll enjoy a guided tour of the light-filled Chapelle du Rosaire de Vence: a chapel that was built from a plan created by the legendary Henri Matisse. Later on, a welcome dinner awaits us in the Provence region.

Nestled in the hills north of Cannes, Grasse is where world-class perfumes are created – so it’s only fitting that we stop in at the Fragonard Museum, where we’ll treat our senses to some beautiful fragrances. Then: onwards to Aix-en-Provence, passing through plenty of quintessential Provençal villages along the way.

On day three, we’ll have the chance to learn more about a centuries-old French tradition – delightful santons figurines – at the Santons Museum. Then, after stopping off in some classic Provençal villages and towns, we’ll move on to Arles – a city that’s famous as the inspiration behind Van Gogh’s paintings – for a delicious included dinner.

Today, Arles is yours for the taking – so why not seize the opportunity to uncover thousands of years of local history and culture? City highlights include the Arles Amphitheatre, the Church of St Trophime, the Langlois Bridge and the Vincent van Gogh Foundation.

First today: a stop at the famous Les Baux-de-Provence (which is renowned for its Les Baux stone), where we’ll see an extraordinary multimedia art show. Then: it’s onwards to a local olive farm, where we’ll make the most of our glorious surrounds by tucking into a delicious picnic together. We’ll even have the chance to taste some of the farm’s olive produce, too. Appetites satisfied, we’ll make tracks to Saint-Rémy-de-Provence, where a visit to the impressive Saint Paul de Mausole Monastery is lined up for us. Vincent van Gogh lived here from 1889 to 1890 – and in the Van Gogh Field, you’ll have the opportunity to see 20 large-scale reproductions of his work.

First today, we’ll pay a visit to the iconic Pont du Gard – an ancient Roman aqueduct with no fewer than three tiers of archways. And this afternoon? We’ll stop off in Avignon, where we’ll visit the Palace of the Popes, before moving on to a local winery –where we’ll visit the wine cellar and learn more about Châteauneuf-du-Pape and Côtes-du-Rhône wines (and indulge in a tasting session). Tonight, we’ll dine together back in Saint-Rémy-de-Provence.

First today: one of our tour highlights! This morning we’ll visit the idyllic Sénanque Abbey, where we’ll meet the monks and take some time to enjoy the calming atmosphere and picturesque surrounds. After that, we’ll move on to the fascinating L’Occitane-en-Provence factory in Manosque, where we’ll step inside the museum and blooming gardens. After a sweet-smelling sensory experience, we’ll set a course through the villages of Luberon to beautiful Tourtour: an amber-stoned town filled with delightful cobbled lanes and boutique shops.

Onwards to the spectacular Gorges du Verdon – the jewel in the region’s crown. Picture this: steep cliff sides, whitewater rapids and turquoise-coloured water. No wonder they call it the ‘Grand Canyon of Europe’! When we return to Tourtour, we’ll come together for one last dinner at a local restaurant. What better way to round off the trip with a bang?

Onwards to the spectacular Gorges du Verdon – the jewel in the region’s crown. Picture this: steep cliff sides, whitewater rapids and turquoise-coloured water. No wonder they call it the ‘Grand Canyon of Europe’! When we return to Tourtour, we’ll come together for one last dinner at a local restaurant. What better way to round off the trip with a bang?