Your 14 Day Sensational Spain affordable tour begins and ends in marvelous Madrid. In between, you’ll discover Spain’s sensational sites and legendary locales of history, culture, and cuisine. You’ll visit the Basque Country in the cities of Bilbao, San Sebastian, and on to Pamplona—city of the running of the bulls, toreadors, and Hemingway’s famous novel, The Sun Also Rises. Venture through the vistas of wine-growing region on your way to Saragossa on the banks of the Ebro River. You’ll visit the Sanctuary of our Lady of the Pillar before arriving in Barcelona. Take two days to explore the beauty and history of Barcelona, including a guided driving tour of its famous sights and panoramic views. See Gaudi’s architectural masterpieces before venturing along the Costa Dorada and Costa del Azahar to vibrant art nouveau and modern style of Valencia—and the home of paella! 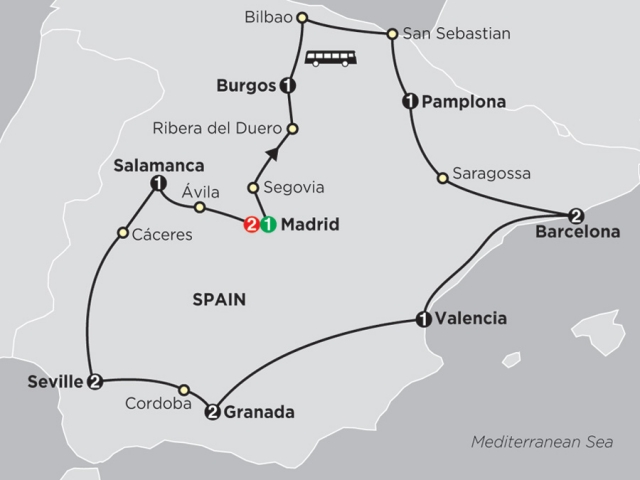 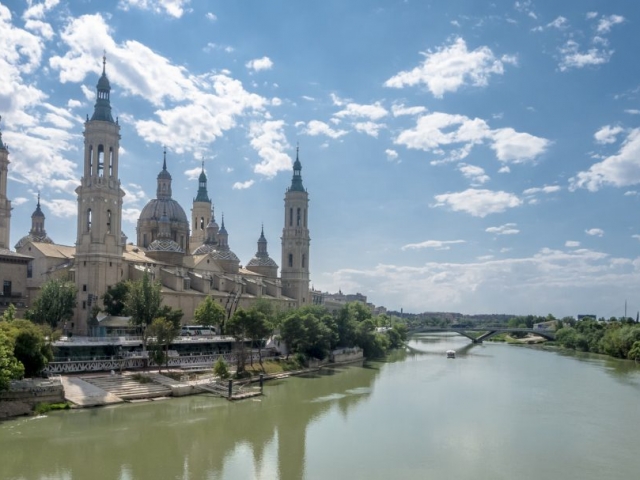 Check into your hotel. Tonight, meet your Tour Director and fellow travellers.

The first visit of the day is Segovia, listed by UNESCO as a World Heritage Site for its soaring Roman aqueduct and breathtaking fairytale fortress. Travelling through Castille and Leon, we reach the Ribera del Duero area, which follows the course of the Douro River and is noted for producing some of Spain’s best wines. Get a taste at a Wine Cellar, then on to Burgos with its landmark cathedral.

The day is dedicated to discovering the Basque Countries as we visit the city of Bilbao, with its contemporary architecture, and San Sebastian, with its beautiful sandy beach. On to Pamplona, famous for the running of the bulls.

Vistas of the Rioja wine-growing region greet you this morning as you travel towards Saragossa on the banks of the Ebro River. Here, visit the baroque Sanctuary Of Our Lady Of The Pillar before arriving in Barcelona, Catalonia’s lively capital.

This morning’s sightseeing with a Local Guide includes a drive around Montjuic to see the Olympic Stadium and to marvel at the incredible panoramic views of the port and city. On to the city centre to Plaza Catalunya and Paseo de Gracia to admire the greatness and eccentricity of Gaudi’s architectural masterpieces.

Travel along the Costa Dorada today and on to the Costa del Azahar (Orange Blossom Coast) to arrive in Valencia, birthplace of paella! Combining striking modern architecture with Art-Nouveau-style buildings and the Old Town, Valencia is one of the most innovative Spanish cities enjoying a very high quality of life.

Spectacular scenery unfolds as you travel inland towards Granada, beautifully situated at the foot of the mighty Sierra Nevada and at the confluence of four rivers. Granada is a compelling city where Moorish influence, old-style tapas bars, and historical sites coexist with a young population of university students, graffiti, and exotic tea houses in the Albazyn quarter.

Today, your Local Guide will bring to life the world-famous Alhambra Complex*, which Moorish poets described as a “pearl set in emeralds.” Built by Moorish kings in 889 AD, this magnificent hilltop palace-fortress features lavish gardens, and is the epitome of architectural beauty.

Visit Cordoba, known for the white-washed houses of the Jewish quarter, but also for its magnificent 8th-century Mezquita, a mosque in which a Cathedral was built following the Reconquista. Admire its splendid giant arches, domed shrine of Byzantine mosaics and 856 jasper, onyx, marble, and granite pillars. Continue your journey through picturesque Andalusia, on to vibrant, festive Seville! Tonight, a chance to join an exciting optional Flamenco show to immerse yourself in the local culture.

An included city tour reveals the best of this colourful Andalusian capital today: see the majestic cathedral; beautiful La Giralda minaret tower, a symbol of Seville; the Real Alcazar palace with its extravagant Moorish architecture; and the landmark Plaza de Espana, built for the ibero-American Expo in 1929. The rest of the day is at leisure.

Stop in medieval, walled Caceres, declared a UNESCO World Heritage Site for its blend of Roman, islamic, Northern Gothic, and italian Renaissance styles. Later, cross the Tagus River and the Guadarrama mountains to arrive in Salamanca. Here you will experience the ambiance and unique Spanish Baroque beauty of Plaza Mayor, heart of the city and one of the most extraordinary public squares in the country.

On to Avila, another UNESCO World Heritage Site, with its imposing city walls, monumental gates, 88 watchtowers, and 2,500-plus turrets. This city is the essence of Castilla and the epitome of old Spain. Upon arrival in Madrid, enjoy a guided tour of the city, discovering its royal elegance and its vibrancy. You’ll enjoy the abundance of museums and cultural livelihood.

Spend the day at leisure to explore the city at your own pace or to join one of our optional excursions or activities.

Your 14 Day Sensational Spain tour ends with breakfast this morning.