Join us on an undiscovered holiday in Sicily—the Mediterranean’s largest island, just off the toe of Italy’s “boot.” You’ll begin in Palermo, a colourful city of churches, squares, marketplaces, and palazzos of every style. Your sightseeing tour includes Cappella Palatina (Palatine Chapel) in Monreale, built in the 1100s, with byzantine mosaics depicting famous scenes from The Bible. Next, take in stunning views with a cable-car ride to the medieval hilltop town of Erice—with cobblestone streets, fortifications, and ancient churches. Enjoy a guided tour of Trapani, set on a harbor that was once a powerful trading network, and visit Marsala, known for its famed Marsala wine. See the Acropolis and its temples in Selinunte, and take a guided visit to spectacular ancient temples near Agrigento. Visit the Roman Villa at Casale, famous for its mosaics, like the “Bikini Girls.” Visit elegant Taormina and the coastal town of Cefalù. Enjoy an excursion on Mount Etna, the majestic volcano overlooking the city of Catania, the verdant valleys and the shimmering blue Mediterranean waters. Your affordable holiday in Sicily returns to Palermo for an overnight to celebrate your Sicilian adventure. 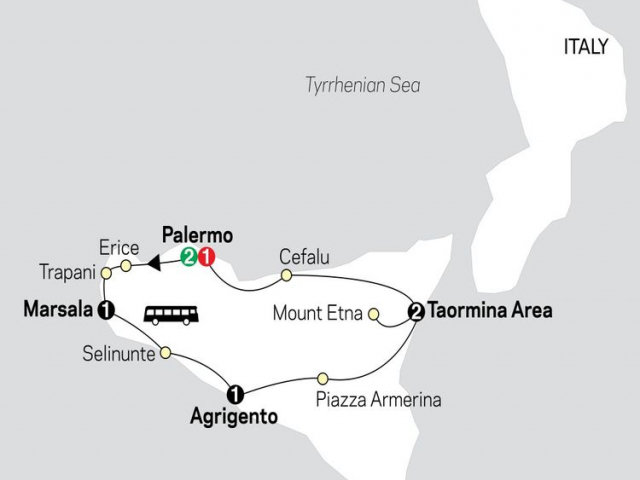 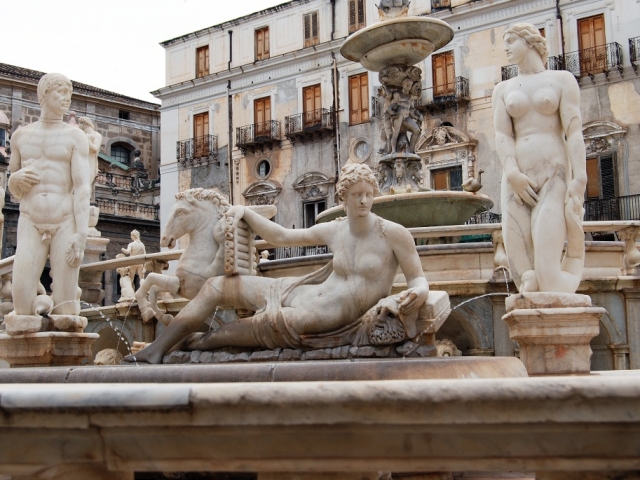 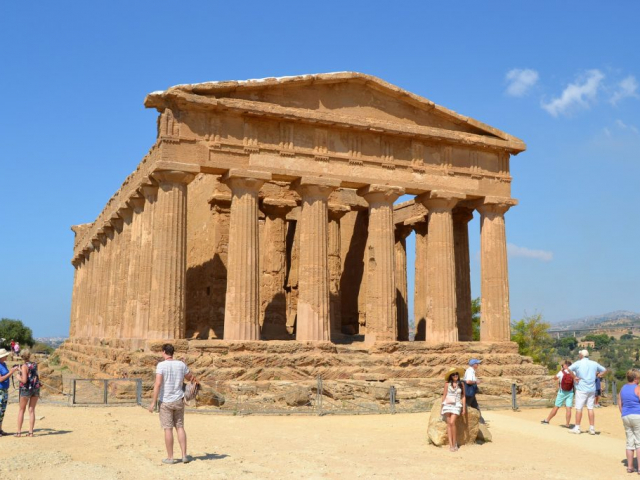 Check into your hotel. Spend the rest of your day exploring this great city. Tonight meet your Tour Director and fellow travellers.

A full day to enjoy this busy and colourful city full of interesting squares and marketplaces, churches, and palazzos in every style-from Moorish to baroque. Join the included sightseeing tour to learn more, and visit the magnificent Cappella Palatina. Later, maybe join an optional excursion to complete your day.

Two Sicilian treats are on the agenda today: First, visit the medieval hilltop town of Erice, reached by Cable Car. Situated about 2,500 feet above sea level, it immediately impresses with its defensive walls and castle, affording breathtaking views over the Gulf of Trapani and Egadi islands. On clear days, see all the way to the African coast. Next, visit enchanting Trapani with a Local Guide. Set on a harbour that was once at the heart of a powerful trading network stretching from Carthage to Venice, the city centre stretches along the port and was built primarily in baroque style.

This morning spend some time on your own in Marsala, known for its celebrated Marsala wine. Then head towards Selinunte, one of the most striking and interesting sites in Sicily. Here, you will see the remains of the Acropolis with its temples and fortifications. Continue to Agrigento.

Guided visit of the spectacular Doric Temple of Concord and the Temple Of Juno Lacinia, archaeological jewels of the Valley of the Temples near Agrigento. On to Piazza Armerina, a maze of steep streets positively overflowing with the colourful atmosphere of Sicilian life. At nearby Casale, visit the Roman Villa, a UNESCO World Heritage Site and famous for its mosaics, including the whimsical “Bikini Girls”.

Drive up the heights of Mount Etna with the option of a jeep or cable-car ride for a better view of Europe’s largest active volcano (subject to weather conditions). Descend to sun-kissed Taormina, magnificently situated on a 700-foot plateau overlooking the ionian Sea. The heart of Taormina is Piazza Nove Aprile, a paved square with unrivalled views of the sea and Mount Etna. Take a stroll along the Corso Umberto, and maybe taste a refreshing granita or a sumptuous cannolo.

Arrive in the coastal town of Cefalu with its medieval squares, streets, and churches. During your visit, see the Norman cathedral, a 12th-century fortress-like structure with elaborate Byzantine mosaics and soaring twin towers. Later return to Palermo. During your final day in this glorious city, catch up on some last-minute shopping or explore more of the city on your own.