The Golden Triangle & Beyond

Experience a spellbinding world of colour, rituals and wilderness on this 12 Day The Golden Triangle journey through India’s cultural treasures. Witness the heritage and grandeur of the Mughal Empire in Delhi. Prepare to be humbled by the Taj Mahal, famously described as “a teardrop on the cheek of eternity”. Step inside temples and palaces for a glimpse of contrasting cultures. Seek out the majestic tiger in Ranthambore National Park. And discover the perfect harmony of chaos and serenity in the sacred city of Varanasi. 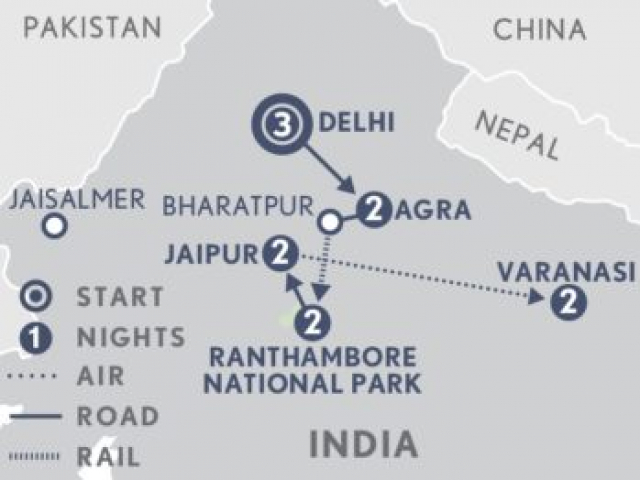 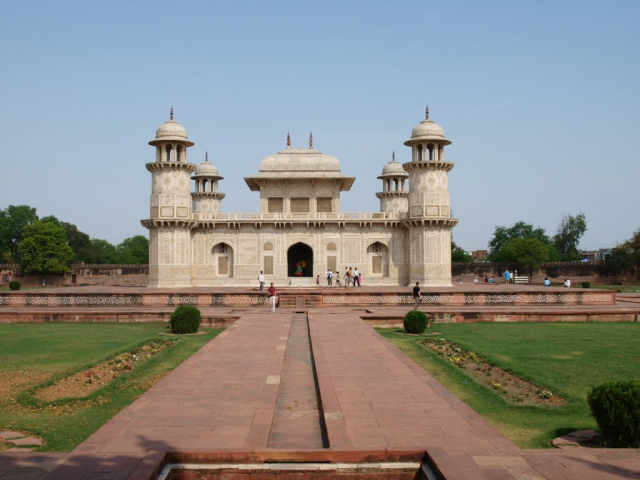 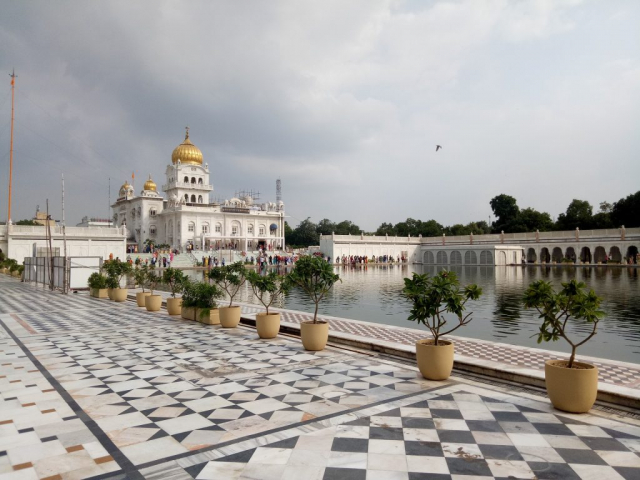 Namaste and welcome to Delhi, India’s northern gateway. Enjoy a warm A&K welcome and private transfer to one of Delhi’s finest hotels. Nowhere are India’s rich cultural contrasts brought more sharply into focus than Delhi with its ruin-studded gardens, a growing contemporary art scene and world-class cuisine. Spend time relaxing in your luxury accommodation the Imperial Hotel, undoubtedly one of Delhi’s finest hotels. Relax in the gardens and exquisite restaurants or step outside on your own and discover more of this fascinating city.

Head out to see the cultural charms of Old Delhi. Join a local expert and navigate the narrow streets abuzz with daily life to the Turkman Gate and the towering minarets of India’s largest mosque, Jama Masjid. Weave through the colourful streets, alleyways and market stalls of Chandni Chowk to witness a mishmash of cultures. Breathe in the aromas of a 400-year-old perfumery and lose yourself in a treasure chest of gemstones, saris and spices. Marvel at the ancient ‘havelis’ (mansions) and Jain temples. Discover Gurudwara Bangla Sahib, one of the most prominent Sikh temples in India, before sampling the lauded local cuisine at Veda restaurant designed by one of India’s top fashion designers Rohit Bal. Spend your afternoon at leisure.

Delve deeper into dynamic Delhi today. Start your tour at the Qutub Minar, the soaring victory tower. Built in the early 13th century in red sandstone and marble with intricate carvings of words from the Quran, this is rightly a UNESCO World Heritage Site. Continue to the jaw-dropping Humayun’s Tomb, also a UNESCO World Heritage Site. Built in 1570 for a Mughal emperor, this beautiful palatial tomb was the first garden-tomb on the Indian subcontinent. Move forward in time to New Delhi, where modern India’s seeds were first sown. Drive down the tree-lined Rajpath (the royal path) to the 42-metre-high stone arch of India Gate, a majestic monument commemorating the contribution of Indian soldiers who laid down their lives for the British Empire in World War I. At the far end of the boulevard, glimpse the sprawling President’s Residence, Rashtrapati Bhavan.

Design your own afternoon with an optional half day activity (additional charge). Take a spiritual journey through several of Delhi’s temples including ISKCON (International Society for Krishna Consciousness more colloquially known as the Hare Krishnas) a well-known Vaishnav temple of Lord Krishna temple and the Bahia Temple or Lotus Temple, one of the most modern Bahai house of worship in the world. Immerse yourself in the National Museum, National Gallery of Modern Art and Kiran Nadar Museum of Art.

Bid farewell to Delhi and travel by road to Agra, home to the Taj Mahal. Standing proud in the heart of the city, the Taj Mahal was built by Emperor Shah Jahan for his wife Mumtaz and is now the world’s pre-eminent expression of passionate but restrained mourning. Check in to your hotel before setting out to explore the city’s hidden laneways, bustling spice market, sacred mosques and temples. Sample treats at a 200-year-old sweet shop, hop on a cycle rickshaw and hear legends that have been passed down through generations.

Journey to the mausoleum of Itmad ud Daulah, nicknamed “the Baby Taj”. This jewel of a landmark is the final resting place of Mirza Ghiyas Beg, grandfather of Mumtaz Mahal (to whom the Taj Mahal was dedicated). Admire its exquisitely carved marble surfaces and see why it’s often considered as an architectural first-draft of the Taj. Continue to Mehtab Bagh (Moonlight Garden), an oasis-like garden complex across the Yamuna River from the Taj Mahal. From this beautiful spot amidst the fountains and flowerbeds, drink in the sunset over the Taj Mahal – it will take your breath away. Return to a royal welcome at The Oberoi Amarvilas, where you can continue to bask in uninterrupted views of the landmark from your luxury room, as well as from the private dining terrace.

Rise early and return to the Taj Mahal as the morning light bathes the marble dome and minarets in a soft glow. Return to the hotel for a sumptuous breakfast. Then, venture to the former imperial city of the Mughal rulers, the Agra Fort, a UNESCO World Heritage Site. Venture within its red sandstone walls to discover a labyrinth of highly decorated palaces and ornate marble mosques built by the great Mughal emperor Akbar I. Return to your hotel to relax, before a final visit to the Taj Mahal as the sun is setting.

Leave the city behind and venture to Ranthambore National Park, one of the most renowned national parks in Northern India. As you travel overland, stop at the deserted city of Fatehpur Sikri to witness one of the region’s most scenic landmarks. Founded in the 16th century by a Mughal emperor, the fortified red sandstone city is regarded as Emperor Akbar’s crowning architectural legacy and is a UNESCO World Heritage Site. After lunch in Bharatpur, continue by air-conditioned train to Sawai Madhopur, an experience not to be missed, and on arrival transfer to your luxury tented accommodation at The Oberoi Vanyavilas. Surrounded by natural beauty on the edge of the Ranthambore National Park, this is the perfect base from which to explore the territory of the majestic Bengal tiger.

Spend the day exploring the Ranthambore National Park, and hopefully spying the famous Bengal tiger. Head out on early morning and afternoon private game drives in an exclusive jeep. Each drive is timed to give you the optimal viewing opportunity of big cats on the prowl amid Ranthambore’s lakes, forests and ruined forts. There’s a wealth of wildlife to spot: keep your camera handy for leopard, deer, wild boar, striped hyena, a variety of monkeys and sloth bears, not to mention an orchestra of birdlife. Between drives, immerse yourself in the luxury of your stunning tented accommodation. Take a refreshing dip in the pool and indulge in a rejuvenating spa treatment. As dusk falls climb up the observation tower for remarkable panoramic views of the surrounding jungle.

Rise early and take a trip to the magnificent Ranthambore Fort, which offers dramatic views of the lakes and surrounding forest at sunrise. Then, bid farewell to the jungle as you head overland towards the dusky beauty of India’s Pink City, Jaipur. Famous for its decadent royal palaces and spectacular forts, its architectural riches are in stark contrast with remote Ranthambore.

Drop your luggage at your palace hotel and get your bearings with an afternoon walking tour. Meander through the old city to discover the lesser-known wonders of the Pink City. Step inside lively temples to witness traditional customs. Take part in a Hindu prayer ceremony, if you wish, and sip tea with locals in a beautifully restored haveli (mansion). Then, gaze at the heavens in the Jantar Mantar Observatory, an ancient stargazing hub packed with enormous astronomical instruments dating back to the 16th century. Before heading back to the hotel, there’s time for a quick photostop at Jaipur’s most famous building, Hawa Mahal (Palace of Winds), with its distinctive red and pink facade.

Leave the hustle and bustle far behind as you soar above Jaipur’s yawning horizons and rolling hills on an enchanting early morning hot-air balloon flight (additional charge). After a relaxing breakfast, embark on a tour of the Amber Fort. Stroll along the ramparts and terraces, admire the Rajput architecture and gain a fascinating insight into the life of the Moghuls. Follow with a visit to the Anokhi Museum for Hand Printing promises to delight as you learn about this classic Rajasthani craft in a restored haveli. Later, discover the Pink City your way with a choice of activities (additional charge). Gain private behind-the-scenes access to the City Palace of Jaipur to witness how the modern royals live. Enjoy a delicious afternoon High Tea on the terraces and manicured lawns of your luxury property whilst learning about henna painting and turban tying.

Enjoy a relaxing morning in Jaipur before your flight to Varanasi, one of the world’s oldest cities, the heart of spiritual India steeped in legend and traditions. On arrival, be met by your local A&K representative and transfer privately to your luxury accommodation, on the banks of the holy River Ganges. This evening, head to the city’s ghats (stone steps) that lead down to the river and witness locals performing the Hindu ritual of the Aarti. Watch as people gather to pray, give thanks and send burning candles down the river.

Rise early for a sunrise Ganges boat trip. Drift slowly down the river, accompanied by local musicians playing the sitar and tabla and soak in a sense of serene spirituality as the sacred river comes to life. See pilgrims immersing themselves at the bathing ghats and offering their morning prayers to the rising sun. Then, set out to explore the city, which is home to more than a thousand temples and shrines. Wander through the old town with its narrow lanes, bustling markets and vibrant temples. Step inside a traditional Akhara, a gymnasium where men of all ages practice a traditional form of wrestling known as kushti or pehlwani. After time to relax, journey to the Sarnath. Understand why this is one of Buddhism’s most important sites and see where Lord Buddha is said to have preached his first sermon. Then, discover Buddhist art treasures in the Archaeological Museum before watching the talented handloom weavers creating exquisite silk Banarasi saris at a local weavers’ colony enroute to Varanasi.

With your Indian adventure at its end, transfer to the airport for your onward flight.