Your 10-day Sicilian Tour is packed with architectural treasures that have withstood the ages. You’ll begin your tour with guided sightseeing in Palermo’s ornate city of piazzas, markets, and churches. You’ll relish the baroque style of the city’s historic sites, and savor authentic Sicilian culinary specialties that have been handed down for generations. From panelle, arancini, and cannoli – to almond biscuits and Marsala wines – your escorted tour of Sicily is an epicurean’s dream when it comes to cuisine. You’ll also be treated to a tasting at Sicily’s oldest chocolate factory. As you tour the perimeter of the beautiful island of Sicily, you’ll also enjoy a cruise to the small island of Motya for a museum tour, as well as escorted tours through Sicily’s centuries-old UNESCO World Heritage Sites such as the elaborate Villa Romana del Casale in Piazza Armerina. From palaces to churches, you’ll encounter ancient works of art, architecture, and archaeological treasures. You’ll visit the Valley of the Temples with its Greek structures that have endured 24 centuries, the iconic St. George Cathedral and Ibla district of Ragusa, and the adorned tiled Staircase of Santa Maria del Monte in Caltagirone. 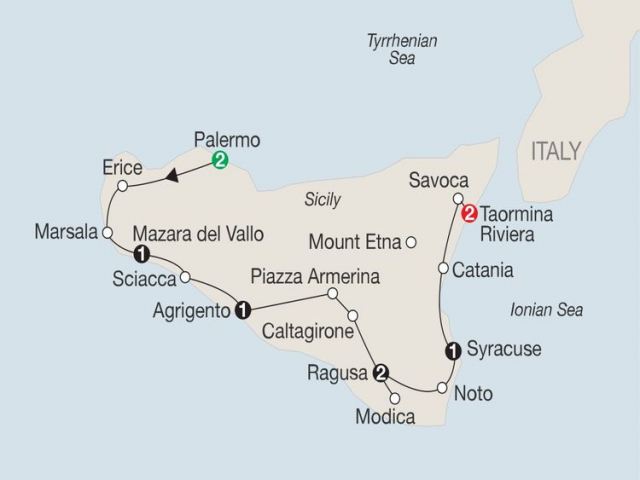 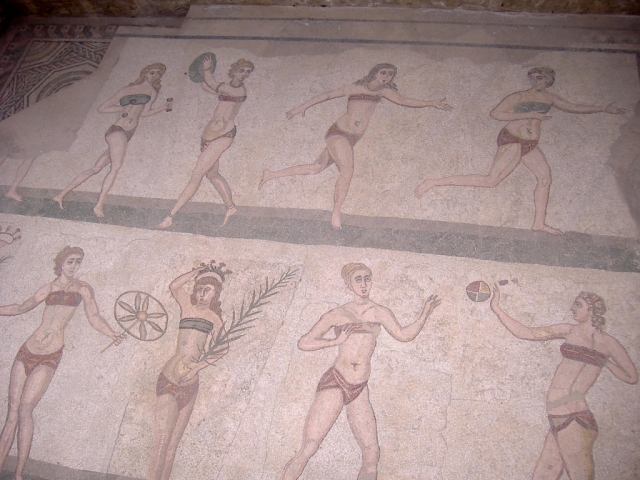 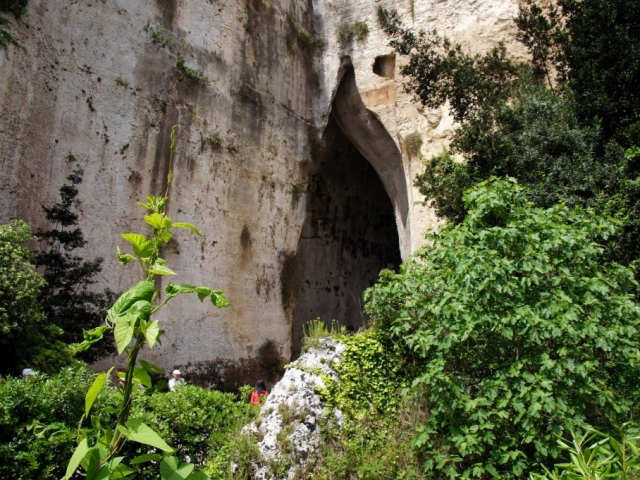 Welcome to Palermo! At 6 pm, meet your Tour Director and travelling companions for a welcome dinner at your hotel.

Discover the capital of Sicily with a Local Guide and enjoy a panoramic view of the Conca d’Oro. Visit the 12th-century Norman Cathedral in Monreale, famous for its 50,000 square feet of precious Byzantine mosaics. Back in Palermo, see the major sites like the ornate Piazza Bellini, Capo Market, the baroque Church of Immacolata, and visit the magnificent Cathedral. A lunch with Sicilian specialties like panelle (chickpea fritters), arancini (stuffed rice balls), and cannoli (fried pastry rolls with sweet ricotta cheese) awaits.

Join your Tour Director for an orientation of the hilltop town of Erice, ending at the well-known Pasticceria Maria Grammatico to savour the traditional almond biscuits and Marsala wine. Next, visit a traditional Salt Mill near Marsala. Then, arrive at your hotel, where dinner with local specialties will be served.

Hear about the town’s fascinating history from a Local Guide before continuing to Sciacca, to take pictures from the panoramic viewpoint. In Agrigento, your Local Guide will take you for a spectacular walk through the magnificent Valley Of The Temples. Even travellers who have visited Athens and Delphi are awed by the gigantic yet graceful Greek structures that miraculously survived 24 centuries of tormented history.

Drive to Piazza Armerina for your guided visit of the Villa Romana Del Casale, a UNESCO World Heritage Site. Admire the largest and most complex collection of Roman mosaics in the world, including the famous “Bikini Girls,” discovered in 1960. Before arriving in Ragusa, stop in Caltagirone and see the mosaic Staircase Of Santa Maria Del Monte, covered with different tiles in a beautiful pattern.

Guided sightseeing features a walk through Ragusa’s oldest district, the Ibla, a UNESCO World Heritage Site with its beautiful palaces and churches. Walk through the Giardini Iblei, the pleasant public gardens laid out in the 19th century, then, visit the iconic baroque St. George Cathedral. Time on your own to further explore or maybe relax at an outdoor cafe! In the late afternoon, travel to nearby Modica with its steeply stacked medieval centre and spectacular baroque churches. Wander along Corso Umberto I and stop at the famous Dolceria Bonajuto, Sicily’s oldest chocolate factory, for a Tasting. End the day with a dinner at a local restaurant.

The baroque town of Noto is renowned for its beautiful historic centre that was almost entirely rebuilt in the early 18th century following the 1693 earthquake. Walk along Corso Vittorio Emanuele to admire the magnificent architecture and San Nicolo Cathedral. Continue to Syracuse, birthplace of the mathematician Archimedes. Enter the Archaeological Site for a guided visit of the 5th-century BC sparkling-white Greek Theater, the Garden of Paradise, the Ear of Dionysus, the Altar of Hieron II, the Roman Amphitheatre, and the Cordmakers’ Cave. Tonight, you may wish to join an optional excursion.

In Catania, see St. Agata Cathedral and spend some time on Piazza del Duomo and Via Etnea. In the afternoon, an exciting optional excursion is available to Mount Etna, the largest active volcano in Europe. Later, arrive at your hotel on the Taormina Riviera.

This morning in the village of Savoca, see the Church of Santa Lucia, made famous as a location for Michael Corleone’s wedding in the movie The Godfather. Enjoy a granita and brioche at Bar Vitelli. Later, in hilltop Taormina, visit the ancient Greek Theater, dating back to the 3rd century BC. This evening, a farewell dinner will be served at restaurant Villa Antonio, an excellent way to say arrivederci Sicilia!

Your holiday ends with breakfast this morning. The nearest airport is Catania.